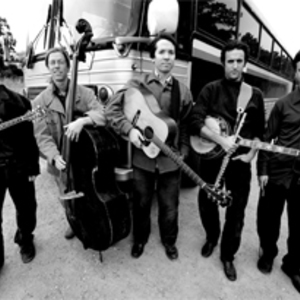 Hot Buttered Rum String Band is a 5-piece progressive bluegrass stringband out of the California bay area. They have an active touring schedule in which they perform for high-energy crowds, often dancing. In the short time since Hot Buttered Rum debuted its music, dubbed as a ?High Altitude Acoustic Experience,? the band has been praised by fans, peers and national media alike, recognizing Hot Buttered Rum for their ?stunning instrumental and vocal virtuosity.

Hot Buttered Rum is attracting a truly multi-generational audience with its ability to create an undeniably hip and fresh sound that weaves together the grounded traditions of folk and bluegrass with the modern influences of rock-n-roll, reggae and acoustic singer/songwriters. Hot Buttered Rum's musical evolution has not only defined their sound, with their extensive touring schedule, the band has become established as one of the nation's hottest young touring acts since setting off as a group of friends on a trail in the high sierras in the early part of the decade to emerge as a band, appropriately named, Hot Buttered Rum.

2005 was a breakout year for Hot Buttered Rum. They have performed at premier music festivals such as Telluride Bluegrass, Newport Folk and South By Southwest, and received an invitation to perform at Hardly Strictly Bluegrass 5. The band's talent has led them to the stage with artists Phil Lesh, Ben Harper, Michael Franti and Spearhead, Chris Thile, Bela Fleck, Peter Rowan, Billy Nershi and Mike Marshall. 2006 saw exponential growth in the band's fan base base and exposure, including headlining San Francisco's historic Fillmore Auditorium. HBR's long anticipated sophomore studio album, produced by Mike Marshall and featuring guest sit-ins by Peter Rowan, Mike Marshall and Darol Anger was released early in the year.