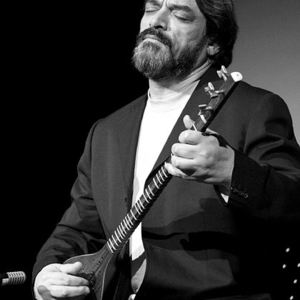 Hossein Aliz?deh (Persian: ???? ???&zwnj;????) (b. 1950, Tehran, Iran) is an Iranian musician and composer. He comes from a traditional training. He learned the Radif of Persian classical music with various masters of the tradition including Houshang Zarif, Ali Akbar Shahnazi, Noor Ali Boroomand, Mahmood Karimi, Abdollah Davami, Yusef Forutan, and Saeed Hormozi, and later recorded the entire body of the Radif based on the interpretation of Mirza Abdullah for Tar and Setar. He also received a B.A.

in Music Composition and Performance from the University of Tehran, and later studied Composition and Musicology at the University of Berlin. He has taught at the University of Tehran and the Tehran Music Conservatory.
Alizadeh has led a solo career, performing both in Iran and throughout North America, Europe and Asia. He was the conductor and soloist in the Iranian National Orchestra of Radio and Television, established the acclaimed Aref Ensemble and worked with the Shayda Ensemble. His first professional experience in Europe was playing in the orchestra of the famous Bejart Ballet Company in Maurice Bejart's ballet, Gulistan.

Alizadeh established the Hamavayan Ensemble in 1989 with a new approach to the traditional Iranian choral singing. Accompanied with traditional instruments, this ensemble has appeared in many of Alizadeh's compositions including New Secret, Gabbeh, Songs of Compassion and Endless Vision.
Official Website: www.hosseinalizadeh.net

Raz-e No: The Novel Mystery