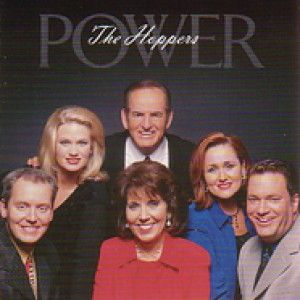 The promise of complete victory is the foundation and cornerstone of any career in the Christian music field. Many talented vocalists and musicians step onto concert stages across the country each week: however, only the faithful and the devoted overcome the pressures of life on the road to delight in the bountiful blessings that are bestowed upon the faithful servant. The Hoppers, whose name has been synonymous with traditional Gospel Music for over three decades, can certainly be labeled as the faithful and the devoted.

This family has enjoyed many rewards of the faithful servant. These rewards are the result of constant faithfulness and continual rededication.

While The Hoppers have enjoyed tremendous success through three decades, the '90s ushered in new found accomplishments. Although this talented musical family has enjoyed many popular hit releases, their first Number One release came in 1990 with the song entitled Here I Am. It stayed at the top of the charts for 4 months and was awarded song of the year for 1990. Since that time five Hopper releases have peaked at Number One. Milk & Honey, Mention My Name, Anchor to the power of the Cross, Yes I Am and their most recent release, "Jerusalem". Heavenly Sunrise and the powerful song That's Him reached Number Two.

In addition to enormous radio success. The Hoppers have enjoyed other national recognition. In 1981, The Hoppers represented Southern Gospel Music at the Religious Inaugural Celebration for President Ronald Reagan. Shortly thereafter they appeared at the National Rally to restore prayer in the public school system. The Hoppers were also a part of the original Singing At Sea Cruise, which first sailed in 1974. The group has been a part of that every year since. On June 27 1998 at the Georgia Dome in Atlanta,GA. They performed a song for Bill Gaithers video entitled "Shouting Time". That would forever change their life and their Ministry. They have toured with the Gaither Homecoming show that played to over 900,000 people per year in most major sports arenas around the country. They have also enjoyed much success as a result of many group and individual awards and accolades.