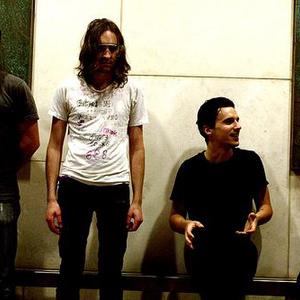 These are anxious times. From unemployment and embattled governments to mysterious mass deaths of birds and fish, it's easy to wonder if 2012's apocalypse won't come a year early. It's heady fare for an indie rock record, but somehow the dense soundscapes from New York City's Hooray for Earth's True Loves find a way to float on thin air. "The record is really aggressive sounding, but soft in attitude," band leader Noel Heroux says. "It's a friendly record.

I get more emotionally affected by extremes. I've really grabbed onto the positive, uplifting feelings in music that get me super psyched?but that can also come from sounds that are daunting and a little scary."

Coming out May 3, 2011, on Dovecote Records, True Loves builds on Hooray for Earth's acclaimed debut EP, Momo, and captures both the personal and universal anxieties that have such a footing in contemporary times. Lead single "True Loves" thumps along neck-snapping drums, awash with blips and synths, surprising breakdowns and Heroux's soaringly languid vocals. Pitchfork has already compared the track favorably to artists like MGMT, Yeasayer and Passion Pit, while saying that "all the right elements are in place...[it] floats along and pounds forward at the same time, and one way or another it wants to carry you along with it." Meanwhile, Stereogum labeled the band one of "CMJ's heroes," taking particular note of Hooray for Earth's "nimble but unpretentious guitars" and "sense of progressive psychedelics and percussive progressions." The sound that has indie-culture's gatekeepers fawning is one that springs directly from Heroux's imagination into a climactic reality.

"I don't write music with an instrument, I usually just get an idea of what the whole song sounds like in my head, kind of like an earworm that stays with you after listening to the radio. My task is to recreate what's stuck in my head in actual audible form, as quickly as possible," he says. "I wish I could just plug a cord into my head...I think that's why the music tends to be a little dense, because I think of all these things at once."

Heroux wrote, recorded, and produced about 90% of the new album, with bassist Christopher Principe and guitarist/live synthist Gary Benacquista peppering parts in a few sessions, and drummer Joseph Ciampini adding two days of rooftop drum tracking. Mixed by Chris Coady (Beach House, Blonde Redhead, Delorean, Yeah Yeah Yeahs, TV on the Radio), the album might as well be a direct link to the exciting mind of Heroux. Hooray for Earth's progression is apparent everywhere on the record and boasts exciting things for a band that has already appeared onstage with Mission of Burma, Holy Fuck, Surfer Blood, The Pains of Being Pure at Heart, Oh No Ono, and many more. Recorded over five weeks in New York, it's at once specific to the summer of 2010 and transcendent of time itself. Once again, a happy set of extremes.

"Most of the [recording] process is just me getting lost and trying to get things done. I feel like I'm on autopilot sometimes. I'll finish a song and wonder, 'When did that happen?' I don't spend a lot of time stressing about what instruments to use or what's missing, I just kind of let it be."