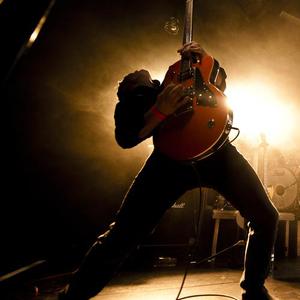 Honcho was formed in 1998, and inspired by bands like Black Sabbath, Kyuss and Soundgarden, the band had great visions of what type of music they wanted to play. Their sound has developed from fuzzy stoner rock in the early years, to a more inventive combination of the different genres within the great world of rock. Still heavy as hell though... In 2000 Honcho was ready to record and release their self financed "Evil woman EP" and followed it up by touring Scandinavia.

In 2000 Honcho was ready to record and release their self financed "Evil woman EP" and followed it up by touring Scandinavia.

French Water Dragon Records were interested in Honcho early on and wanted the band to contribute with two songs on their "Water Dragons Greatest Hits Vol.1" release. The cooperation went so well that Honcho later decided to release their debut album "Corporate Rock" on Water Dragon Rec.

Because of artistic differences there have been some alterations in the line-up, but Honcho believe they have finally found "the magic spell that makes them on of Norway's most complete Heavy Rock Bands".

In 2005 Honcho's second album "Burning in Water Drowning in Fire" was released and following the release was a tour covering most of Europe and the release of their live DVD "Live in Paris, France".

Today, Honcho has developed more of a neoclassical hard rock sound. Their third album, "Battle of Wits", will be released September 6th 2010, and sounds closer to their original musical vision than ever before! "Battle of Wits" is way more epic and manifold structured, as the songs makes you think of classic Ten Years After as well as the darkest doomiest Tony Iommi riffs.