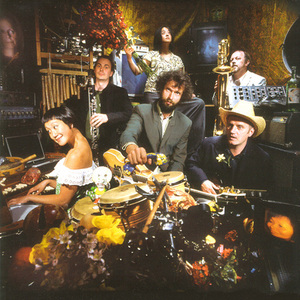 There are 2 artists with the same name: Manchester based jazz band and Lansing, Michigan based punk band. 1.) Homelife is a group based mostly in Manchester, signed to the Ninja Tune label. Homelife is not a definite entity. It's hard to pin down their sound, how many people are in the band or even which band they are in! Nearly every Homelife track has a different line up. Less of a collective, Homelife is more of a pool of musicians whose talents are marshalled by reluctant foreman Paddy Steer.

1.) Homelife is a group based mostly in Manchester, signed to the Ninja Tune label.

Homelife is not a definite entity. It's hard to pin down their sound, how many people are in the band or even which band they are in! Nearly every Homelife track has a different line up. Less of a collective, Homelife is more of a pool of musicians whose talents are marshalled by reluctant foreman Paddy Steer.

There's a do-it-yourself ethos evident in Homelife. All material is recorded at Paddy's house with musicians doing their bit in small groups. With 15 to 16 contributor's on the most recent album, 'Cho Cho' the piecemeal approach makes sense and Paddy admits that it wouldn't be possible for the whole band to be in the studio at the same time. "It's not like the Monkees where we all in the room together. Ten years ago Homelife wouldn't have been practical but advances in technology have made a project like this possible," he states. Whilst the majority of the co-operative are Manchester based, male vocalist Faron Brooks lives on Vancouver Island, Canada and key member Simon King is based in London. Technology again lowers the height of these creative hurdles with Paddy even seeing positive aspects to Faron's displacement. "It means we get more editorial control over his vocals," he deadpans before likening the arrangement to that Portishead have with their vocalist.

2.) HOMELIFE(US) Carrying the torch for rugged Midwest bands into the next generation of punk rock, Homelife is expanding upon its forebears with 2012 full-length debut, Translation. Since forming in 2009 in the same rugged plains and college towns around Lansing, MI as like-minded acts such as Small Brown Bike and Cheap Girls, the new album marks not only a progression for the band and its members' roots in hardcore acts, but for the genre itself.

The band went through a number of transitions and membership changes prior to the line-up that recorded Translation, which features Mike Poshedly on bass/vocals, Craig Rasmussen on guitar, Jacob Weston on vocals/guitar, and Chaz Villarreal on drums. With each change, the progression can be traced from the band's demo cassette (recorded at Cold War Studios, by Rick Johnson: Mustard Plug, Cheap Girls), to the band's 7" split with Bike Tuff (recorded at Studiotte: La Dispute, Continuance, Brothers), which sees Weston's raspy, fractured vocal delivery and the bands' increasingly complex angles taking shape.

While the members' hardcore background is still on display in some aspects of Translation (most of the songs clock-in the 2:30 range and sound best played LOUD), the sparkling and sharply-cut dynamics on display have set the ideal background for Weston's unique delivery and lyrics that throwback to the sincerity of 90's favorites such as Jawbreaker, Knapsack (whom the band covers), and The Promise Ring. Taking a number of sonic risks, beyond what its peers may have been comfortable with, represented a monstrous swing from Homelife and a clear home run with Translation, which is almost certain to gain traction one of the best surprise debut LP's in punk rock that 2012 will have to offer. Certainly the band has not come out of nowhere, having toured extensively with bands such as Settle for Less and Downtime, but no one who had been privy of their previous output could've predicted the stellar (top to bottom) and heartfelt record that resulted from the band's Fall 2011 sessions at Studiotte.

Upon hearing Translation, Black Numbers (Banquets, Luther, The Copyrights) immediately stepped in to join with the band's hometown label, Bermuda Mohawk (Cheap Girls, River City Rebels, Jack Oblivian) to co-release and distribute the record across the US in late-spring 2012. The band plans to take its loud and passionate live show to all corners of the globe in support of Translation, throughout 2012 and beyond.

They have released a demo in 2009 and have released a split 7" with Bike Tuff on Either/Or Records. In May 2012 they released their debut full length "Translation" on Black Numbers/Bermuda Mohawk Productions