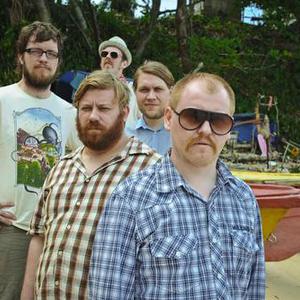 Hj?lmar (the name has two meanings, either it means helmets, or is simply the given name Hj?lmar) are an icelandic reggae band that has been playing together for about 4 years. They did two albums as the original line-up with a couple of swedish guys on board: Hlj??lega af sta? (eng: Starting Quietly), (2004) and Hj?lmar, (2005). They enjoyed much success in Iceland, and made icelandic reggae something to talk about and listen to. They toured a bit during the summer of 2006 and ended with a farewell concert in Skri?uklaustur, Iceland on August 20, 2006.

They have now made a come-back after this short break, but the swedish half has left the band and now it consists of the icelandic founding members + a couple of guys from icelandic jazz band Fl?s. They have just released a new album - Fer?as?t (e.Travelsash) which has been well received in Iceland.

Later in 2008 they begun recording a new album and traveled to Jamaica to record there. The trip was a good success and a documentary was made about it.
They have released two singles in 2009, the songs "Heyrist Hverjum?" (Who Hears?) and "Manstu" (Remember). Their fourth Album release is scheduled in September 2009.