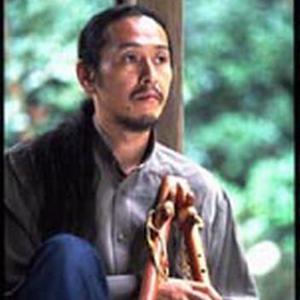 Hiroki Okano (Composer, Producer, bouzouki, percussion, voice, etc.) One of the front runner in New Age, Ambient, ethnic music scene in Japan. Started his career in a music production office during his school days and produced many albums, advertisement and programs on TV. From IC DIGIT, Germany, he released 6 solo albums; "1987 1990", "ENN", "Music of Wind", "Rainbow over the gipsyhill", "Heaven in the Koo" and "LEELA".

Highly evaluated in outside Japan as Keyboard Magazine of Germany praised him: After Kitaro and Ryuichi Sakamoto, he should be the most notable musician of this century with his impressive purity and cleanliness. In '91, he founded a global music group "Wind Travelin' Band" and provided a lot of performances including some in Europe and USA. Using over one thousand of original wind-bells, he created sound installation to show the natural surroundings. Landscape Channel, England and ABC, USA introduced this project. He also founded Tenkoo Orchestra and performed at "the world jazz stage" of the world largest art festival, Glastonbury Festival. In Japan, he attracted the eyes by the co-performance with Haruomi Hosono and appearance at Rainbow 2000. He established a "Global Tribe" Label and directed the music in International Dolphin and Whale Conference and Pacific-Japan Underwater Film Festival in Yokohama.

Rainbow... over the Gypsy Hill