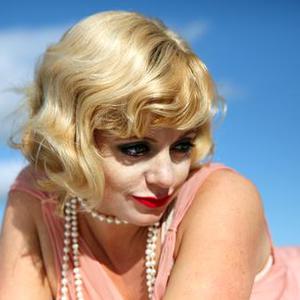 On her fifth album, "Never Ever Going Back", she serves a groovy cocktail of jazz, pop noir and cabaret.

In Norway she already is a well established artist with 5 album releases and a successful career as singer, actress and songwriter. Her last album Sound Your Horn received astonishing reviews. Abroad her accomplishments consists in fronting Swedish jazz/electronica duo KOOP on their last tour of USA, Asia and Europe, and singing/co-writing their latest single Strange Love. Strange Love was launched in the USA on Atlantic Records, and ended up as soundtrack to Coca Colas latest commercial "Library".

Now Magazine, Toronto writes:
"The transfixing stage presence of sultry Norwegian vocalist Hilde Louise Asbjornsen stole the show. Her smoky, note-perfect rendition of Strangelove was so close to the record, we wondered if she was pulling a Britney."

Asbj?rnsen has five releases at the time of writing:

- "Eleven Nights and Two Early Morning" in 2004, co-produced by Per Husby.

- "Never Ever Going Back" TBR in March 2010. Produced by Anders Aarum.

Asbj?rnsen founded her own record company, Sweet Morning Records, in January 2008 for the release of "Sound Your Horn".

With Lene Kongsvik Johansen she forms the cabaret duo "Asbj?rnsen & Joh" which have had several successful self-composed shows in Norway.

In late 2008 she played the lead role of Belle Poitrine in the musical Little Me by Neil Simon, with music by Cy Coleman and lyrics by Carolyn Leigh. The production was directed by Catrine Telle and produced by Riksteatret.