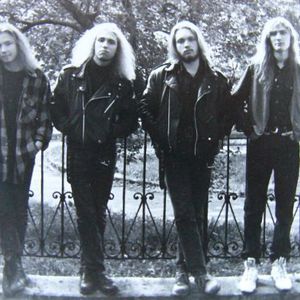 There are four bands known under this name (one from Russia, the other from New Zealand, the third from the USA, and the fourth from Bulgaria): 1) Hieronymus Bosch was a technical/progressive death metal band hailing from Moscow, Russia. The band was founded in November 1993. By 25 December 1993 the band recorded its first demo, and performed live for the first time , within a month from recording of the demo. Since then, Hieronymus Bosch were frequent guests at various venues.

1) Hieronymus Bosch was a technical/progressive death metal band hailing from Moscow, Russia. The band was founded in November 1993. By 25 December 1993 the band recorded its first demo, and performed live for the first time , within a month from recording of the demo. Since then, Hieronymus Bosch were frequent guests at various venues.

The next step was the recording of a studio demo, consisting of six new songs, under the work title of "Petra Scandali", which happened to be the first serious studio experience for the band (July 1994). That very autumn was also marked by the first release of Hieronymus Bosch - "The Apogee" appeared in the "Thrash Tvoyu Mat' - Part 1" metal compilation CD. Henceforth, various compositions from the "Petra Scandali" demo were included in numerous metal compilations.

For about six months the band strenuously worked on the stage as well as during frequent rehearsals, preparing for the planned recording of a full-fledged debut album. Eventually, in January 1995 the musicians get down to work in a studio. Within two weeks, at Aria Records studio, Hieronymus Bosch finished work on its first album "The Human Abstract". Through a protracted search of a suitable issuer label, "The Human Abstract" album only saw light as late as in autumn 1995. From that moment on, the band headlines more and more concerts, due to the high sales of the album.

By the beginning of 1996, Hieronymus Bosch is working on the new material. Unfortunately, the working process was suspended, on account of the departure of Vladimir Leiviman, the leader of the band. In summer 1998, the group reunites and attempts to record an EP. Yet, the plans were not fated to be carried out. In July 1998, Pavel Bogoroditsky passed away. Having lost the permanent drummer and the close friend, musicians appear at the crossroads, imperceptive of the further destiny of the project. Only in June 2003, having invited Andrey Ischenko (End Zone, Symbol, Scrambled Defuncts, Catharsis), an old friend and colleague, to join as a new drummer, the band was finally reborn. Thus, by the beginning of 2004, the structure of the group is as follows:

In this cast, Hieronymus Bosch was back on stage in spring 2004. After a series of successful performances in Russia and CIS countries, the band was invited to participate in TUSKA Open Air festival, for the first time for a band from Russia. The music was well received by the Finnish fans.

In 2005, two releases saw light the reissue of 1995th The Human Abstract and a new release Artificial Emotions that are currently best selling in Russia via local label CD-Maximum.

Equivoke was released in 2008. The band also announced that Andrey Ischenko had left the band for good, and would be replaced by Mikhail Sorokin as the new drummer.

They take their name from the famous Dutch painter.

As of May/June 2010 the band have decided to call it quits.


2) Hieronymus Bosch is New Zealand's longest running dark industrial act formed around 1985-86. A two piece utilizing many reel to reel tape recorders, loop effects, steel objects and an arsenal of classic analog synths and drum machines. Very dark and unique. They performed only three times as this incarnation, twice in New Zealand and once in Sydney, Australia. The live art performances included poetry and slide shows and were performed in art galleries. Their sound has changed greatly throughtout the years, due to collaborating with a myriad of engineers, percussionists, guitarists, and like minded artists. BOSCH were pretty experimental back then.

1990 saw a new development. A guitarist, Morpheus Ire, was added from a local dark metal band and a bassist/percussionist, Paul Blanchard, was recruited to play alongside the machines and keyboards,which instantly gave the group a whole new direction. A more chaotic, angst ridden, almost anarchic direction. Live performances meant the destruction of stage sets and props. Audience participation was always encouraged live. As part of an early 1986 performance the entire interior of a soon to be demolished house was torn apart in a frenzied ritual, accompanied by looping noise tapes fed through a generator driven PA system. Around 30 people took part in this now infamous display of art terrorism.

Hieronymus Bosch, during this period, attracted quite a large and loyal following from the Death/Punk and Dark Metal communities whilst still maintaining their dedicated Industrial/Experimental music fanatics. They performed quite extensively throughout 1990 - 1993 .

Late 1994, Bosch headed back to its roots, industrial/dark ambient.

In 1996, Hieronymus Bosch reduced itself to two core members. "We've managed a few style change overs through the years but we always turned back to what we were all about". Their sound is a very personal one. Constantly drawing aural imagery from their own and others personal lives. Interests, beliefs, fears and desires are all contained within the 'nightmare soundtracks'. Religion interests us, as does Life and Death. "Our main influence is life itself as a whole. There is so much drama going on in the world. Life isnt dissimilar to a huge television screen, continuously playing and repeating random scenarios. One moment, a horror show. War, chaos, death and fear, the next, perfect families in sugar coated dream worlds. Spirituality, Netherworlds of fantasy and escapism, Astronomy and the structure and complexities of the human mind all make appearances within the Bosch world. Our sound reflects as our own visions. Our views. Our way of thinking. Some pieces are slow and dark to depict the negatives of reality, (or Virtual reality), the down trodden and the weak, while other sections are lighter and somewhat uplifted. The balance is always there though. It seems to work".

Hieronymus Bosch's music is constructed by combining the organic with electronic. Nature vs Technology. Layering samples with movement. Frequencies and modulations with sounds of their own existence. They are both fans in the idea of power in minimalism. Creating huge rhythm through repetition and looping of sounds and samples. Constantly building and creating new directions and moods.

Their first release back in 1990 was on video format."Our concept is a visual one, so we decided this was the best way to SHOW our sound". The five track release entitled simply HIERONYMUS BOSCH - THE VIDEO was limited to 300 copies and was swallowed up quickly within the hungry world underground scene In 1997 HIERONYMUS BOSCH released a self titled album of dark and horrific scapes which has been circulating well throughout the world, mainly around the UK and European countries. 1998 saw the creation of their second album, THE DIVIDED SELF. Another dark journey into the world of BOSCH. THE DIVIDED SELF is a collection of some sorts, a merging of styles and textures, lightness and darkness. They have also featured on a number of international underground compilations and made a couple of appearances on the mid 90's performance/video release series TECHNOHELL.

Hieronymus Bosch have produced short film soundtracks for video artists in Belgium and Australia and have had tracks in many various international compilations. In 2003 They released their third album 'The Dream Songs' on Polish label, Fluttering Dragon.

3) Hieronymus Bosch, now known as The Bosch, is a band originally formed in Williamsburg (Virginia, USA), but later moved to New York. Their debut album Havin' Fun, Soundin' Good (2004) can be described as surf rock, garage rock and punk rock. Later they changed name to The Bosch and released Buy One, Get One (2005) and Hurry Up (2007), these albums show a style change towards rock and roll and melodic pop.