Hidden In The Fog 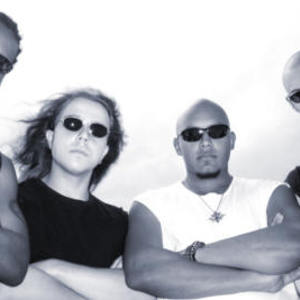 Savage & epic, bestial & beautiful. As finger-breaking technicity challenges utmost emotional depth, DAMOKLES perfectly illustrates HIDDEN IN THE FOG's genuine vision of breathtaking and extreme musical expression. The exceptional application of composing skills combined with the sheer scope of diversity and complexity within the arrangements is by far surpassing the boundaries of what is commonly regarded as ?black metal? nowadays.

Utilising and comprising elements of various different musical streams and genuine contrapuntal composing techniques, DAMOKLES has turned into an album that is bound to redefine the established standards regarding open-minded, demanding and extreme musical art full of emotional passion, pain, savagery, deception and fury?

The basis of this melange is formed by the exceptional guitar work that has been a trademark of the band for quite a while now ? polyphonic riffing melts with furious arpeggios and acoustic interludes.
The vocal contribution unfolds an additional own microcosm of emotional density ? screaming and lamenting, whispering or triumphantly declamating ? the stylistical diversity of lead vocalist Gh?sh reaches easily from thundering abysmal growlings to operatic chants of stunning grandeur and switches instantly from malignant black-metal-typical screaming to fragile reflective whisperings.
The overal arrangements are daring and show an almost intellectual approach regarding the utilisation of melodic key-motives within the score and their subtle modulations and developments throughout differents songs. The fact that Gh?sh and Botis, the creative heads of the band, have both had a full education in classical composing and scoring techniques actually proves highly beneficial to the musical arrangements on this album.

One year of highly-intensive composing where followed by six months of concentrated studio-work: focus was set on even the slightest musical details throughout these 62 minutes of DAMOKLES. But finally, the result of an enormous creative effort took visible and audible shape - it is there! And quoting vocalist/guitarist Gh?sh: ?It was worth every single sleepless night!?.