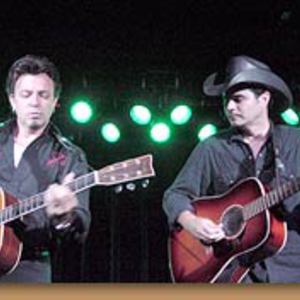 In this life of ours, sometimes you plan and move along accordingly, sometimes chance just grabs the wheel and steers you toward your next chapter. On a break from touring with Cracker , my good friend Lynn called me up and told me 'Johnny, there's a band from Denver you gotta see. They're right up your alley.' Not long after that, my father-in-law and drinkin' buddy Ted and I were grinning ear to ear, cold beers in hand as we watched a tall, dark handsome and slightly inebriated singer named Jim Dalton celebrate his birthday by diving ass over cowboy hat into a sea of adoring...

Cut to 2007.....after a year of drinkin, hell raisin', jammin', and writing together, Mr. Dalton and I found ourselves kicking back on our buddy John Macy's recording studio couch, popping a couple of cold ones and listening to the final mixes of "The Hickman Dalton Gang....Volume 1". We didn't start out to make three separate, concise CDs, each with its own flavor, but with the way the songs were materializing, the story began to tell US what to do.

While Vol. 2 [pending release, 2011] is already threatening to be a howling, good-natured, electrified, stomping honky tonk opera of sorts, the first batch of songs that we completed together (or that just found us) were more haunting...darker, quieter. The words and music pointed us mostly toward instruments that were around in the mid to late 1800s and that is how we tell these tales. Its the old west...its adventures and misadventures, its joy, suffering, power, crime, freedom, friendship, bad luck, good luck, hope and bittersweet memories all rolled into one. Volume 1 that is. We hope you enjoy hearing it as much as we did making it.