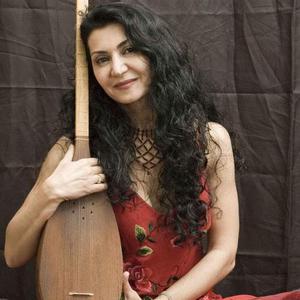 Heyraneh started music by learning kamancheh from Morteza Varzi in 1980 and later from Mohammad Reza Lotfi. She then studied radif on Setar with Mehdi Kamalian. In 1993, she took up Tanbour, the devotional string instrument of Yarsan people of Kermanshah in Iran. She studied this music consecutively with Keykhosro Pournazeri, Ali Akbar Moradi and Alireza Feyz Bashipour. Since then, playing and chanting with tanbour has been part of her daily spiritual practice.

She never intended to publicly share her prayers until recently when record producer Michel Tyabji of Limitless Sky Records, requested she recorded the songs she composed as meditations. She contacted percussionist Jamie Papish, one of the few Americans playing a frame drum called Daf-a traditional Iranian instrument used for devotional practice, who in turn contacted Christo Pellani-a versitile world music percussionist to add to the overall sound which led to the creation of her album ?Prayers on Tanbour?. She now lives in Los Angeles where she teaches Kundalini yoga, and tanbour as meditation.