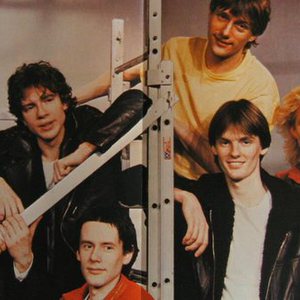 Het Goede Doel was a successful Pop group between 1978 and 1991 from Utrecht, The Netherlands, which subsequently reformed in 2001 and 2008. The core of the band was formed by composer Henk Temming, lyricist Henk Westbroek and producer Sander van Herk. Both Temming and Westbroek did the vocal duties as Van Herk played the (lead) guitar. In 1982, during the height of the Doe Maar hype in The Netherlands, the popularity of Het Goede Doel also rose to stellar heights due to the hit d?but album "Belgi?".

This album features, amongst others, the Dutch top 10 hits "Belgi? (Is Er Leven Op Pluto)" and "Vriendschap". Later that same year Henk & Henk issue a double A-sided Christmas single. An English version of "Belgi?" is recorded (now entitled "Luxembourg"), but Het Goede Doel only keeps scoring hits in the Dutch charts with songs like "Gijzelaar" and "Ik Dans Dus Ik Besta". The sophomore album "Tempo Doeloe" (1983) and its folow-up "Mooi & Onverslijtbaar" (1986) both sell well, but it seems Het Goede Doel is well past its commercial peak by the late 80s. That is, until the release of the 1988 duet album "Iedereen Is Anders". One of the songs of that album ("Alles Kan Een Mens Gelukkig Maken" featuring vocals by Ren? Froger) became a single and ended up at the top position of the Dutch Top 40. But the end is near for Het Goede Doel and the band splits in 1991. Temming and Westbroek each record solo albums with minor success.

Het Goede Doel reforms in 2001 for a number of shows, a compilation album ("Geef De Mensen Wat Ze Willen", also released as a 4-disc box set) and a final single; "Alle Mensen Wonen Op De Aarde". On April 15th, 2008, Het Goed Doel releases a free download-only album called "Gekkenwerk". The album is sponsored by IT-Staffing and all money made with a benefit concert related to this album goes to Viafrica, a project aimed at IT education in sub-Sahara Africa. The album gets a full physical release in the autumn of 2008, coinciding with the winter 2008-2009 theatre tour in The Netherlands and Flanders. On Saturday April 11th, 2009, Het Goede Doel gives a three-and-a-half hour concert at Ahoy' stadium in Rotterdam, featuring guest performances by Alderliefste, Frank Boeijen, Gruppo Sportivo, De Kast, radio DJ Ruud de Wild and Tim Akkerman, former lead singer of rock band Di-rect.