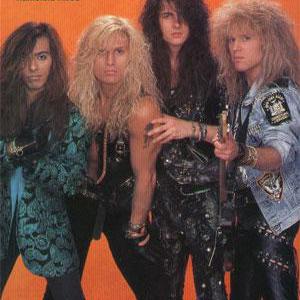 Hericane Alice was your typical glam metal band that put the fun back into hard rock. But like so many other bands that didn't get a major label deal until the late 80s, they were largely ignored by the record buying public. Hurricane Alice originally formed in Minnesota as a three piece consisting of Leni Dimancari (guitar and vocals), Scott Werner (bass) and Rusty Miller (drums). For over eight months the three guys worked on material before beginning their search for a full time vocalist.

David Reece was asked to sing on the original demos but refused when his current band Lillian X was about to hit the road. After scouting for front-men the next choice was Bruce Naumann, whose current band The Employers was somewhat on hiatus. However Naumann wasn't quite ready to desert The Employers, so the three original Hurricane Alice members hooked up with Jeff Meyers in Steele. But the guys were unhappy with being a backup band and decided to resume their search for a singer. Luckily Naumann decided he was interested in fronting the group and they started gathering a loyal following and even interest from Atlantic records, but inside tension led to Dimancari leaving the band to work with some Y&T members in Rising Tyger.
In 1988 Hurricane Alice left for the bright lights of Los Angeles. Werner soon left to join Black 'N Blue front man Jaime St. James in Freight Train Jane and troubles with the law led to the departure of Miller. Naumann, now the focus of the band, continued forward with new members Danny Gill (guitar), Ian Mayo (bass) and Jackie Ramos (drums). The band decided to change its name to Hericane Alice due to an impeding lawsuit with L.A.'s Hurricane and released their debut. Tear the House Down was a nice collection of hard rock, but failed to make any commercial inroads and Hericane Alice disintegrated.
Miller contacted Reece (after his short stint with Accept) and the two started Bangalore Choir. But once again Miller would be out of the picture when Bangalore Choir, complete with Mayo and Ramos started recording. Dimancari pursued a solo career and Naumann and Werner formed a band called the Mighty Roostas. Mayo and Ramos would also later work together with Doug Aldrich in Burning Rain.

Tear The House Down