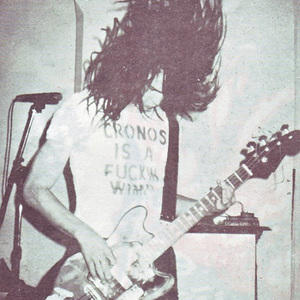 1. Heresy was a fast politically-themed hardcore punk band hailing from a tiny village outside of Stoke-on-Trent, UK. Originally called Plasmid , the band was formed by Reevsy (guitar/vocals) and his 15 year old cousin Steve, on drums . After one Plasmid demo, they joined up with newly recruited bassist Kalv from Nottingham, playing some local shows under their newly chosen, more "metallic " moniker - Heresy. Many of the early shows were booked by local HC promotor , and later Earache founder -Dig.

Influenced by Discharge and US Hardcore bands like M.D.C, D.R.I and especially Siege. They entered the local Nottingham no-budget Pavilion Studios just before Xmas 1985 to record the Never Healed flexidisc. With Reevsy on guitar and vocal duties,and Kalv on bass, the band laid down 6 tracks in barely a day. The flexi was released by Kalv and Dig's DIY jointly funded label ( the name "Earache" was added to the label at the last minute) and all 3000 copies sold out right away. The six tracks included were blisteringly fast thrash with non-existant production, but the proto-metalcore riffs in the songs attracted metal fans to the band as well as the usual hardcore punk crowd.

By 1986 Dig had officially formed his fledgling record label - Earache - and asked Heresy to record a split LP with fellow Nottingham politico-punks Concrete Sox. The first recording of the Heresy side took place at Rich Bitch studios in Birmingham early that year, and featured Reevsy on vocals, but on the eve of a European tour later in the year, the band recruited the current Concrete Sox drummer John March to join on vocals to boost their on stage presence. Having gone down well on tour- John's hi energy stage jumping antics were spectacular at the time - he joined Heresy permanently and re-recorded the vocals in the studio for the eventual Heresy/Concrete Sox split LP release in early 1987.

By the time of the release, Reevsy had quit because he was unable to commit to any touring, so Mitch Dickinson of the then unsigned Unseen Terror stepped in ably on live guitar. The Heresy Mosh Crew, as they became known, undertook further tours including UK touring with the Stupids, and toured Europe many times, with the likes of BGK, Larm, etc, becoming almost like ambassadors for the growing UKHC scene. Heresy were soon to be joined by the even faster and noisier Napalm Death playing Europe's squat and youth club circuit constantly.
Mitch's sole recordings with the band were the "Thanks" 4 track 7" EP, recorded in 1987 at the Radio Trent studios in Nottingham, ( released DIY by a fan in Germany and sold on tour), and the 2 tracks on the ludicrous UK Rock DJ's "Bailey Brothers - Diminished Responsibility" compilation of up 'n' coming UK thrash talent. This was released on a major label, and thankfully disappeared without trace.

On the eve of the bands first BBC radio session with famed DJ John Peel, Heresy decided to split with Earache and go fully DIY in their endeavours, recording a number of albums and Ep's under their own steam over the following 18 months, but, ultimately line up problems lead to the band splitting up in December 1988. In 1990 Earache made available a retrospective CD of all the bands recordings for the label. Entitled "Never Slit Thanks" (shorthand for it containing the Never Healed flexi, Split LP and Thanks EP, but with the obligatory tongue-in-cheek Japanese spelling mistake) it was Licensed by Toys Factory so was only available in Japan.

3. A Hardcore Punk band from Detroit, Michigan formed in 1981 active until 1991. They released a series of demos and shared the stage with the likes of Discharge, GBH, Necros, and DRI. In 2008 a limited 500 press EP "The Final Hour" was released on outcast records containing 4 tracks of recorded material from '88.

4. Heresy is a hip-hop artist from Erie PA. His 2nd mixtape, "Rough Draft" is coming out on Down For Anything Records in 2011.

20 Reasons To End It All