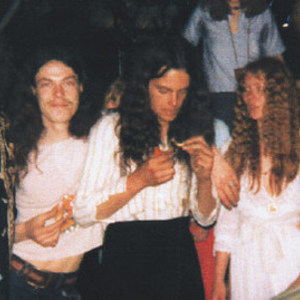 Here and Now, originally formed in spring 1974 to play at the Windsor Free Festival of that year, went through many early personnel changes, finally settling on a hard core membership of founder Kif Kif Le Batter, Twink El Toesmalone, Steffe Sharpstrings and Keith the Bass for most of the mid to late 1970's. This line-up had a rare and elusive musical chemistry that brought about the sound that still defines the band today. The history of the group is complicated:

By the summer of 1977 news of the groovy jammers had reached Daevid Allen, the founder of "Gong", who about that time was looking for a new psychedelic band. Daevid joined them temporarily in October 1977 and named the new project "Planet Gong". At that time Twink was replaced by Gavin Da Blitz on Synthesizer. By spring 1978 Daevid had left, and the band became Here and Now once more.

After touring for much of 1978, there were big changes in December that year, with many old faces moving on including Kif Kif, Suze and Ano. In 1981, Steffe followed.
However, Keith the Bass kept the flag flying, fronting various outbreaks of Here and Now over the years. Steffe rejoined the project during the 1990's.
In the ad hoc way the band's name suggests, other groupings of the Here and Now clan have also arisen, Noteably "Ici Maintenants" in 2001. Ici features KK, Twink and Steffe of the 1970's H&N line-up, plus, variously, Tim Flatus and Mike Howlett on bass. And in 2007 there was the first live reunion of the full 1976 Here and Now 'quad-umvirate' of Kif Kif, Steffe, Twink and Keith the Bass, as a tribute to another core 70's band member who had sadly passed away, Suze da Blues.