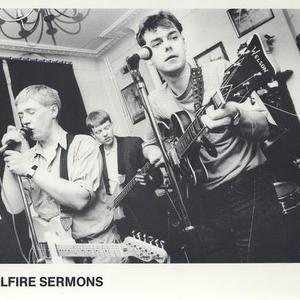 Hellfire Sermons - indie punk pop band from Liverpool UK formed from the Decemberists (of Liverpool 1984-86) Jenny Lind and Swim Naked who released a series of 7" vinyl singles from 1987 to 1994, now collected together on the album 'Hymns Ancient and Modern' on the Bus Stop label. The band were at one time favorites of Richey Edwards of Manic Street Preachers and played the same London pub back room gigs as the Preachers, Emily, Jasmine Minks, The Claim and The Jactars for the legendary Esurient Communications. Their later singles were recorded by Ken Nelson, later Coldpay's producer.

Resollutely anti-capitalist and anti-commercial the band have continued writing, recording and playing and new songs 'Fish Eye View', 'Luminous Crocodile' and 'Mystery of Life' can be heard on My Space.