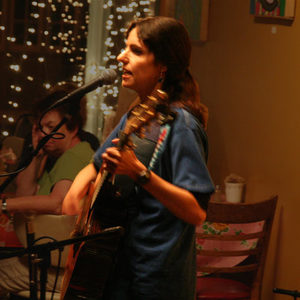 Singer/songwriter/guitarist Helen Avakian cultivates "a courageously idiosyncratic sound, a warm, lacy realm of reality and romance." Helen's impressive musicianship coupled with her down to earth stage manner has endeared her to an ever-increasing audience. "Meshes her classical guitar roots with a songwriting style that adds a new dimension to the realm of acoustic performers; Helen Avakian has developed a songwriting talent which few possess," says Rhythm and News Magazine.

Performance credits range from appearances at Lincoln Center and public television to New York city street corners and cafes. Reviewers praise her "instinctive sense for songwriting...an exceptional voice over just as exceptional guitar playing" (Southern Dutchess News) and More Sugar contends "You will come away from one of her performances with a feeling that you have just seen a rising star. Extremely inspiring!"

Helen's CD, Vanishing Point, was voted "Favorite Recording" in Rhythm and News magazine, where Helen also won "Favorite Acoustic Act" four times in a row. The album project originally began as a winter single "Mistletoe Blues," which became a local radio favorite and went on to receive AAA play around the US. Another song was featured on the "Great Strings, Great Music" compilation from Elixir Guitar Strings. In December 2003 Helen was honored to have her song "Christmas Tree" featured on the Ho Ho Ho Spice holiday compilation, alongside work by Stewart Copeland of the Police, Better than Ezra, Graham Parker and other artists.

I Love The Moon