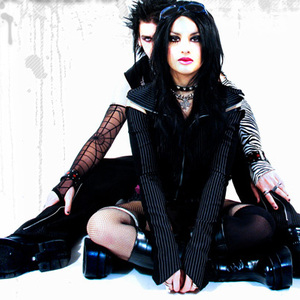 HELALYN FLOWERS is the musical/visual expression of the power duo N0emi Aurora (vocals, Arrangements, Words, Visual, Images) and Max (Music, Programming, Synths, Guitars, Production), creators of a world of contrasts made by vintage/ futuristic sounds and vibrations. By proposing an innovative hybrid of 80s-like New Wave/Punk, Alternative, Electro and Rock, they impose themselves as paladins of the New Electro rock Wave since 2005.

By proposing an innovative hybrid of 80s-like New Wave/Punk, Alternative, Electro and Rock, they impose themselves as paladins of the New Electro rock Wave since 2005.

The plasticism of Gary Numan, David Bowie and Marilyn Manson era-Omega, the electronic tunes of New Wave and Post Punk and images and colours of Glam's multiform universe are dressed in such Pop appeal and in a catchy and surreal visual as well, allegorically suggested by the own's moniker meaning.

The 'Helalyn 's flowers', in fact, represent the miracle of life emerging from a steril, cold and arid dimension. By this, N0emi and Max embrace ?absurd? meant as antithesis of conventional and as a symbol of the eternal possibility.

2005's ?Disconnection? mini-CD is the first result of the power duo only just after six months from its own birth, at once revealing HELALYN FLOWERS sound's salient features, made by a mixture of Punk/Wave and Goth/Nu Metal supported by powerful drum machines and fronted by N0emi's voice, which will become one of the most remarkable trademarks thanks to unique tone and style and put near Bjork, Skin and Shirley Manson by the media.

Firstly, United States are charmed by HELALYN FLOWERS, who are on heavy rotation on many American radios with the song ?Alienate Me?, entering Top 10s among names like Linkin Park and Faith No More.

As for Europe, hystorical magazines like Germany's Sonic Seducer (which will feature HELALYN FLOWERS on the March 2006's sample with ?Alienate Me?) and Italy's Flash, on which they will be the first unsigned act to be treated in the same way already adfirmed and famous bands usually are, with double-paged interviews, contests, specials etc., shaking a strong interest and clamour in Italy, collecting many Top Releases and Hot Spot columns.

Thanks to ?Voices? and ?E-Race Generation?, supported by such a glamorous image contrasted by disturbing elements (according to the own power duo's clash philosophy) and plunged in their own typical white, HELALYN FLOWERS strongly become one of the coolest Goth Rock icons.

Their fanbase is really heterogeneous, embracing both younger fans of Goth/Emo/Punk/Visual and more ?mature? lovers of Electro/New Wave/Industrial, hailing from scandinavian glaciers to mexicans arid lands?

In the same year, they become one of the most followed acts on Vampirefreaks where, thanks also to having won a contest for being featured on the 1st volume of the 4CD Box ?Fxxk The Mainstream? compilation, they catch the interest of Belgian indie Alfa Matrix's artist manager, who sign HELALYN FLOWERS on February 2007.

Audience, media and DJs are warmed up by the opener EP ?Plaestik?, out on June 2007, that, supported by a solid worldwide distribution (Audioglobe, Sony, Soul Food, Metropolis, Soyuz?), immediately pushes ?Voices? to the tops of DAC (Deutsche Alternative Charts), soon conquering the interest from the best of alternative press (Zillo, Sonic Seducer, Orkus, Gothic, Rock Sound UK, :Ritual:), together with an ever higher response from South America.

The coming out of the debut-album ?A Voluntary Coincidence? on November 2007 (defined by English press as ?one of the most eagerly waited in ages?) discographically launches the HELALYN FLOWERS name leading it to the tops of the new alternative scene again, thanks also to the new 'hymn ' ?Im Human, Defective? and to a series of concerts between Italian and English stages together with Emilie Autumn, Neon, Ataraxia, Das Ich and Gothminister.

?A Voluntary Coincidence? is one of the most controversial albums ever, breaking audience in two, between purists still anchored to stylistic rules and younger lovers of innovation and new sounds.


HELALYN FLOWERS' sonic formula, so heterogeneous, multiform and strong of an own trademark difficult to relate to other artists's work, will become influence and source of inspiration for a nearly next new wave of bands tired of usual purisms and willing to relate themselves with fresher and innovative sonorities suggested by a necessity of experimentation.

In this, HELALYN FLOWERS truely opened doors and crushed prejudices.

Rock Sound UK and Orkus will treat them as the best newcomers, dedicating them special columns as well as flattering words.

In 2008, after having been featured on many compilations (?Gothic Spirits?, ?Endzeit Bunkertracks?, ?Cryonica Tanz??) and major press's samples, they homage Depeche Mode with their own version of ?I Feel You? on the tribute double album edited by Alfa Matrix titled ?Recover: Depeche Mode?.

They also release the new inedit ?Psychic Vamp? as anticipation of the hugely waited successor of ?A Voluntary Coincidence?. This song is pure HELALYN FLOWERS trademark, through catchy Electro Synths, versatile vocals and a Punk-like carpet of rhythmics and guitars. Fans answer electric and fervour for new album grows ever more.

?Stitches Of Eden? is the definitive title of the second full-lenght from HELALYN FLOWERS.

By it, N0emi and Max show to be not the usual self-repetitive act, completely renewing their own style as well as introducing a markful 80s Pop Rock influence?

While the previous ?A Voluntary Coincidence? was quite of a dark album criticizing the ruinous state of modern man, the new ?Stitches Of Eden? reveals a much more positive artistic approach far away from the doldrums of decadence, suffering and self-infliction.

This new record shows a step towards an awakening of humanity, through themes like purity, healing, love and fantastic surreal sceneries.

Just for this, sound results much more open and inclined to an ever more intense and dreamy vocalism.

Songs like ?Hybrid Moments?, ?Your Killer Toy?, ?Sitting On The Moon?, ?Never Enough? and ?Love Like Aliens? propose an innovative and explosive mixture of Gary Numan, Killing Joke, Eurythmics, Duran Duran, The Killers, Blondie, AFI, Good Charlotte, Marilyn Manson, Depeche Mode, The Cure, Deadsy, Human League and Bjork, thanks to a unique style which makes of HELALYN FLOWERS a name destined to enter the astonishing panorama of immortal stars of the Third Millennium's alternative music.

?Stitches Of Eden? (out on Alfa Matrix), anticipated by the introducing EP ?Spacefloor Romance? (including remixes from Psy'Aviah, Leather Strip, Studio-X and Halo In Reverse), is available on both regular edition and deluxe edition Box (including goodies plus one bonus disc including remixes from Andy ? famous DJ, painter and formerly member of the Italian New Wave/Pop legend Bluvertigo- , Xelius Project, Interface, Mechanical Cabaret, Neurobash, Adam Kult, Suicidal Romance and Slave Republic).

White Me In / Black Me Out (Deluxe Limited Edition) CD2

White Me In / Black Me Out (Deluxe Limited Edition) CD1