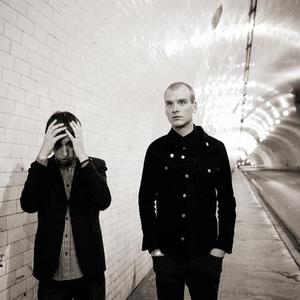 The friendship that spawned Patent Pending, the debut release from Heavens, began several years back when Matt Skiba moved to Los Angeles from Chicago, and wound up becoming housemates with Josiah Steinbrick, himself an East Coast native. "We're both music nerds," Skiba explains. "So one day were both hanging out listening to records and Joe pulls out this cassette he had recorded with just these instrumental tracks.

"We're both music nerds," Skiba explains. "So one day were both hanging out listening to records and Joe pulls out this cassette he had recorded with just these instrumental tracks. Even without lyrics I could tell they were amazing songs and said that we should start writing together. I had a sixteen-track in my room that I was using to demo Alkaline Trio songs, and once I fell in love with Joe's songs, I thought, I could write lyrics to these so easily."

The album itself was written in about a week in August of 2004. "I would pick up some wine and we'd head in my room to write," remembers Skiba. "I would basically go into my room and write a song," Steinbrick adds. "Then I'd bring it back to Matt's room and we'd lay it down. Matt would add lyrics to it and we'd refine the arrangements to perfect them."

"With Alkaline, I'm usually thinking Ramones and Misfits," Skiba adds. "But Joe is such an incredibly talented, imaginative player, that he built this foundation that let me feel like I could sing low in my register, and let the influences of Sisters of Mercy come out of me." With Matt's vocal influences paving the way for his gentle, almost whispering melodies, Steinbrick's distinct soundscapes were shaped under the influence of pop experimentalists such as Wire, Brian Eno, and Television.

With lyrics as pretty as they are eerie, Skiba brings us images of an almost comforting brutality, a warm razor-blade embrace filled with blood dropping from the sky and arterial sprays painting the carpets. Steinbrick offers up layer upon layer of instrumentation, which we can imagine starting out as single notes on the guitar, that build and swell and change when you least expect them to. Distilled to their separate parts, the songs seem to have emerged fully formed from two complimentary imaginations. There is real vitality amidst the images of death and decay.

Once the bedroom demo skeleton of all the songs was finished, the two enlisted producer and friend Ben Lovett to start adding flesh to the bones. Over the next 3 months Patent Pending was brought to life at his Sunny Heights studio in Los Angeles, with Josiah directing the instrumentation, Skiba providing the melodies and Lovett orchestrating the chaos. When you hear moments like the final 30 seconds of "Heather" you get a sense of the madness and raw creativity bouncing around between them. In addition to Lovett's ambient backdrops, drum programming and lush string arrangements, Steinbrick called on drummer extraordinaire Matthew Compton to help him put on the finishing touches. Finally the finished monster was placed in the hands of engineering guru Ryan Hewitt for mixing.

Having funded and recorded Heavens entirely on their own, Skiba says the pair's partnership with Epitaph Records came quickly and made perfect sense. "I have a terrible memory, but I do remember, when I first heard Joe's music, thinking that this is something - that if done correctly - could be pretty amazing. I think part of the reason that we're with Epitaph is because of Brett's enthusiasm [label founder Brett Gurewitz]. I played this stuff for him and he said this record is fucking brilliant, every single song is killer."

On December 30, 2008, it was confirmed by Steinbrick that Heavens had disbanded. In a statement released via a MySpace bulletin, he stated: "This is no longer a Heavens page. Sorry, that's just the way it's going down. Matt will still be doing Trio stuff and last I heard he might be working on a wonderful solo record. I'm not really positive actually but I'm sure it will be great".