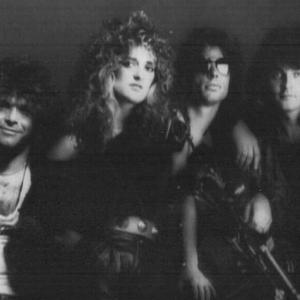 The Headpins are a mildly successful hard rock band that has ties to some of the biggest names in Canadian rock. They have continued to take their female fronted brand of hard rock to the people with various line-ups over the years. The Headpins were formed as a side project by Brian MacLeod (guitar) and Ab Bryant (bass) who, due to a recording contract gone badly, were unable to tour with their band Chilliwack.

They toured around the Vancouver area with Denise McCann (Randy Bachman's wife on vocals) and Streetheart drummer Matt Frenette. By 1981 Frenette had left to concentrate on Loverboy and was replaced by Bernie Aubin, while McCann's departure wasn't far behind, and with the addition of Darby Mills the classic lineup was complete.
The debut album sold well, but Mills had to tour without McLeod and Bryant who were still tied to Chiliwack. The Headpins toured with such acts as Kiss and Billy Squier. By 1983 members were no longer involved in Chiliwack and could concentrate fully on a follow-up album. Line Of Fire cracked the Billboard 200 behind the success of the single "Just One More Time". But 1985 would prove to be the beginning of the end for the band. Their label went bankrupt during the recording of Head Over Heels and they were picked up by MCA. When an American tour with ZZ Top fell through, MCA wanted the band back in the studio only months after the albums release!
Mills decided to go solo and MacLeod tried to keep the Headpins alive with Chrissy Steele. After recording the album MacLeod's health began to fail him, and they decided to release the album under Steele's name. In the mid 90's MacLeod passed away from cancer. Fed up that people other then the members of the Headpins were making money on the name, Mills reformed the band with Aubin, Bryant, and guitarists Alfie Galpin and Tony Dellacroce. New material is rumored to be in the works.