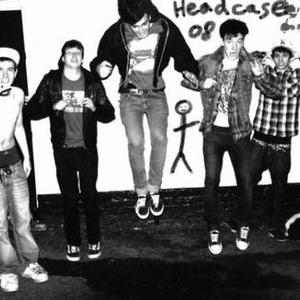 There are three bands called Headcase. 1) Headcase originally started back in 1986 in Brugge, Belgium but due to our young age then and lack of dedication this didn't last for long. But most in the band kept on playing music and formed bands of their own. The old members lost touch. In 1993 Face (drums) and Nick (vocals) met up again and decided to start a new band. On guitar we recruited Kris and on bass came Chris, who was the bass player of the Pride. The band was called Cat o'nine tails and we played a mixture of rock/ metal / punk and OI!.

We did play quite a few gigs with this band, our biggest was at the first international tattoo convention in Bruges, where a couple of thousand people turned up. Not especially for us of course. We recorded a studio and a live demo, but even with all of this something didn't feel right. We wanted to play OI! music again and in 1996 we decided to reform Headcase.
We got our old guitar player Henk back in the band, so now we were a 5 piece band. At that time Pure Impact records was planning to release a Belgian OI! Compilation, they asked us to be on it. We were the first band to go into the studio where we recorded 6 tracks. For some reason the other bands took so long to go into the studio, Pure Impact decided to release 5 of our tracks as a mini cd called '' Still Fighting ''. The 6th track was never released, it sounded different then the others, but maybe in the near future it just might be released after all.
With this line-up we played a lot of gigs, but soon after ''Still Fighting'' was released, both Henk and Chris left the band. Henk wasn't replaced; we decided to carry on as a 4 piece band, because finding a new bass player was hard enough. We had loads of different bass players, but they never fitted the bill. Finally Chuck joined the band in 1998, he fitted in right away. With this line-up we recorded our first full cd '' Coming Home '', also released on Pure Impact. We also recorded a track (No more mr. nice guy) for Sick Mind Rec. But after a while things started going wrong again, both Face and Chuck found it harder and harder to dedicate themselves to the band. So it was now a question of finding new members again or packing it in. We thought at first lets pack it in, it's been great.
But soon the bug crept in again and we started to look for new recruits. A week later we had a new drummer, Jens and a new bass player, Steve (lead singer with the Pride). So we were ready for it again. We recorded a new 4 track vinyl E.P. called "Ready to go". We also recorded the song "Coventry" for the Business tribute album and the 2nd album "Ammunition".

In 2008 a new album, "Old glory boys" hit the streets. For this album, Luc joined the band on bass and Steve switched from bass to guitar, to give the band a more powerful sound. "Old glory boys" features 12 new tracks as well as a selection of 9 of Headcase's best songs all re-recorded, tighter and more powerful than the old originals.< But there was trouble ahead, both Kris and Jens had fallen out with the rest of the band and so they left . Again it looked like the end was near, but the remaining members didn't want to give up yet. So they started to look for new members and soon the band found what they were looking for. A new guitar player Eef ( Badlands, Offside, the Pride, les Vilains,... ) and Sven ( KBK, les Vilains, the Pride,....) on drums.

2) Headcase are a UK hardcore band signed to Thirty Days Of Night Records. "When a group of pipe-smoking ne'er-do-wells discovered the ecstatic throes of Frosty Jack's in a budget price alcohol section, they knew an exciting new musical style would flourish. Instead, they now play frosty-punk, a diabolical, aspartame-infused slurry of thrash and hardcore, with more stomach-swishing mosh-parts and groin grabbing solos than you can shake a drained Frosty's bottle at! Set to slosh into your bowels, thrash your intestines and ridicule your attire/opinions, watch out; these grimey urchins are sullying a venue near you, 2009"

3) After the band Curve reformed in 1996, Dean Garcia created Headcase as a solo outfit to continue his experiments in electronic music. He released "Mushiness" in 1999 and the follow-up "Crosseyedrabbit" in 2001. Crosseyedrabbit also contains additional programming and electronics by Jason Novak of Acumen Nation and DJ? Acucrack fame.