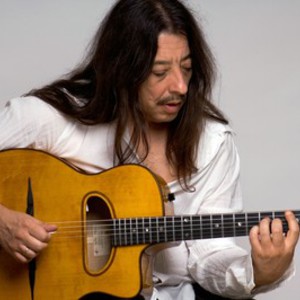 Harri Stojka is an Austrian Gypsy Swing Guitarist. He comes from a Roma Gypsy family that surrounded him with rhythm and harmony before he could even talk. When Harri Stojka was a kid, his dad gave him a plastic guitar he got at the fair. Only six years old, little Harri was visibly fascinated by it. So Harri's father didn't waste any time and bought him a real instrument that was appropriate for his age. From that point on, the classical or Spanish guitar became the focus of all of Harri's attention.

His first impressions of music came from the Beatles. When Harri was still a little child, his mother would sing Beatles songs to him. When he was a bit older, guitarist George Harrison was his absolute guitar god. Harri Stojka spells his first name with an "I" in deference to the name George Harrison. His sister Sissi always listened to the latest soul records at home, sister Doris was into English rock, and Harri's mother liked Elvis Presley. So a colorful mixture of various musical styles influenced Harri's world. His father's musical idol was Frank Sinatra, if only because the Americans - or more precisely General Patton of the 3rd US Army - liberated him from the hell of captivity. At Christmas celebrations after the war, the older members of the family sang Sinatra songs with Romany lyrics as well as heartrending Romany songs from the past in memory of the family members who had died in concentration camp and others who had passed away. Harri and his cousins always hide under the tables. They wished they could just run away to escape the gloomy atmosphere. This, too, influenced Harri's musical expression.

Vienna-born Harri Stojka comes from the diasporic Lovara Roma dynasty of the Bagareshtshi clan, which 150 years ago came from Wallachia. His father and all of his relatives who were born before 1942 felt the impact of the murderous reign of the Nazis. Of 200 family members, only six survived concentration camps like Auschwitz, Bergen Belsen, and others. After the terrible suffering in concentration camp, his father and uncle survived the famous Death March. Although Harri and his sisters were born much later, they grew up with their parents' grief and suffering. The pain of the war years lingers on to this day. That's why Harri still treats the subject in his projects. Stojka's latest project, Garude Apsa (meaning "hidden tears") commemorates the liberation from the terror regime 61 years ago. This production is dedicated to everyone who shed tears in the face of injustice. Sixty years after the liberation from the Nazi regime, this CD pays tribute to the musical roots of the Roma and give today's generation, the children and grandchildren of the survivors, a sense of pride and courage for the future.

Hearing a solo by Pat Martino was an important turning point in Harri's career. Pat Martino's Modern Jazz Lines were an "I-can-do-that-too" experience for Harri Stojka. The almost unending flow of notes in Martino's playing exerted an irresistible fascination on him. But when it came to Django Reinhardt, Harri was convinced that Django was the greatest guitarist genius of all times. For Harri Stojka, jazz started with bebop. He memorized countless solos by Charlie Parker and George Benson. Guitarists that influenced him include Pat Martino, George Benson, Joe Pass, Karl Ratzer, and above all Django Reinhardt.

Harri Stojka's professional career began in 1970 with the formation Jano + Harri Stojka at the Arena. A few years later, Harri, still very young, joined Karl Ratzer's band Gipsy Love as a bassist, and a short time later became a guitarist in Peter Wolf's Objective Truth Orchestra. After the band dissolved he founded the first Harri Stojka Express, the only Austrian group to have performed alongside Jimmy Cliff, Eric Burdon, Van Morrison, and Carlos Santana at the Open Air Festival in the Vienna Prater Stadion. A short time later, he was invited to Montreux, the Mecca of all jazz musicians, where he played with Larry Coryell at the Guitar Summit. This performance before a critically versed audience was a tremendous success and garnered him praise and recognition from world-class musicians. The record Live at Montreux recorded there bears impressive witness to this key event in Harri Stojka's career.

By this point, if not earlier, Harri Stojka had advanced to become one of the most important Austrian jazz musicians. Harri Stojka sent Live at the Roma Wedding, a recording of a concert, to various Austrian radio stations and jazz magazines. Within only a week, one of the most renowned Austrian jazz magazines, Jazzzeit, unanimously selected it as the CD of the month. Stojka was referred to as a worthy successor of his lifelong idol Django Reinhardt. He was also declared the most outstanding Gipsy jazz guitarist worldwide. The CD A Tribute to Swing, which was successfully distributed throughout Europe, followed a short time later. In 2005, the magazine Concerto named Harri Stojka Best Musician in the category Jazz National. On August 15, 2006, this recording (retitled A Tribute to Gipsy Swing) was re-released by Jochen Becker of Zoho Music in New York. In Germany, renowned jazz legends nominated it within only a week for the German Music Critics Prize. For this formation, Harri Stojka engaged his old friend and companion Claudius Jelinek for rhythm guitar, Heimo Wiederhofer for snare, whisk broom, and cymbal, and Ivan Ruiz Machado for the contrabass. They have already played at many festivals, among other things at the legendary jazz festival in Montreux, where they performed two concerts back to back, and at the Khamoro Festival in Prague, the Sziget Festival in Budapest, the famous Django Reinhardt Memorial Festival in Augsburg, the Graz Jazz Festival, the Salzburg Jazz Festival, and many others.

The absolute highlight of this year was an invitation to the jazz festival in Jakarta and a subsequent concert tour in Bali. An invitation to play for the King of Ubud followed. Harri Stojka and his band brought European jazz (Gipsy Jazz) to Indonesia for the first time. Last year the band was invited to the Detroit Jazz Festival, perform live at The Living Room and Cornelia street Cafe in New York City, at the Syracuse Jazz Festival, in Anger by the Gipsy Swing Festival. in Paris by the Sonsdhiver Festival and in Tunis by the Musiquat Festival.

The philosophy behind Stojka's music is pure fun and the joy of making music. Even though Harri Stojka has already made a number of recordings, live concerts remain the most important aspect of his artistic activities.

A Tribute to Gypsy Swing