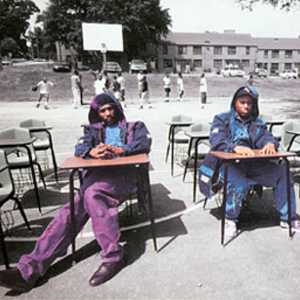 Like so many crews, the Hard Knocks (emcee Hardhead and deejay Stoneface) were doomed by their satanic contract on Wild Pitch Records to drop a solid but virtually unheard LP, in this case School of Hard Knocks. Although Wild Pitch's infamous history of mismanagement and strict adherence to Industry Rule # 4,080 is duly noted, one should not hastily assume that the Hard Knocks' nosedive into ultra-obscurity is entirely attributable to show biz woes. Although it certainly was.

Rapper Hardhead delivers respectable, sincere poetry and his monotonous flow is honey to the ears allowing you to evaluate the lyrics on their own merit.

Furthermore, such cerebral cuts as ?Blow to the Head,? and ?Thoughts of a Negro,? Hardhead are full of truth. His fixation on crooked cops, the explicit topic of at least four tracks that is continually referenced throughout the rest of the record, shows just how ridiculous growing up can be for a black man in America. While many of the beats are hyper, happy, and danceable Hardhead's steez just screams we got the beats and it is time to spit truth; his baritone conjures the picture of a man trying to kick the truth to the young Black youth. This is not a bad thing. The samples are crystal clear, highly original, and extremely dope, an awesome record that requires repeated listening.

Musically, the Hard Knocks are indebted to DJ Mark the 45 King's indelible horns and Marley Marl's powerful snares. Their lyrical influences include Rakim and Chuck D, whose timely vocals are respectfully cut into the mix. An absolute epitome of a slept-on gem.