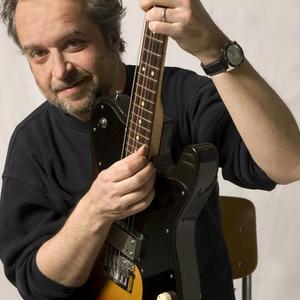 Hank Shizzoe (truly named Thomas Erb) is a Swiss song writer whose range of music goes from Blues over Country to Hard Rock. He is said to be able to play and to compose with the real feeling as if he were an American. In recent years he toured with slide guitarist Sonny Landreth and his band, Hank Shizzoe & The Directors. The Directors are Hank's longest stage pals, although each one of them is also heavily involved in other music projects.

In recent years he toured with slide guitarist Sonny Landreth and his band, Hank Shizzoe & The Directors. The Directors are Hank's longest stage pals, although each one of them is also heavily involved in other music projects.

Originally from the Eastern part of Switzerland, Hank works and lives in Bern where he sells guitars in the Krompholz music store. Ironically, Hank is best known in the USA due to his concert tours in the South whereas he goes largely unnoticed in Switzerland. To increase the mystery around him, he leaves it open on his website wether he's truly Swiss or from Hawaii.
http://www.hankshizzoe.com

MoreHank Shizzoe :
Hank Shizzoe was born smack dab in the middle of Europe in 1966. One day he found a guitar and learned how to play it. After some time words came to his mind so he decided to sing them. Simultaneously. He now owns several guitars. That is why he has also written a lot of songs. Together with his band he played these songs in more than 750 concerts for lots of people in Europe and the US. Since 1994 he has released eight studio albums and two live sets. Hank Shizzoe lives in Berne. He likes cats, mountains, pasta, motorcycles, the sea, deserts, the jungle, polite and impudent human beings and all kinds of sweets.

After six outstanding releases for CrossCut Records Hank Shizzoe & The Directors hooked up with Blue Rose Records in 2007 and released the widely acclaimed album "Headlines." During the following tour they recorded "Live In Motown" in Stuttgart, Germany. The title pays tribute to the city's main industry. What you get with this 2CD plus DVD release is one entire show in fine audio and movie quality. No overdubs, no tinkering, no nothing. Just honest handmade music by a fantastic four piece outfit, all live, all real. Rolling Stone magazine writes: ?Those who care about these things have been knowing for a long time that Hank Shizzoe is the best roots-rock songwriter and guitar player who?s not hailing from the US. And that he would still be one of the best even if he came from the Promised Land.?
Discography:
1994 CD "Low Budget"
1996 CD "Walk"
1998 CD/LP "Plenty Of Time"
2001 CD/LP "Hank Shizzoe"
2003 2CD "In Concert With Sonny Landreth"
2005 CD "Out And About"
2006 CD "Why Don't You Love Me? - A Hank Williams Songbook" with Claudia Bettinaglio
2007 CD/LP "Headlines"
2008 CD "Von M?usen und Menschen - Of Mice And Men" (OST)
2009 2CD/DVD "Live In Motown"
2010 CD/LP "Breather"

This Place Belongs To The Birds

Plenty Of Time (With Loose Gravel)