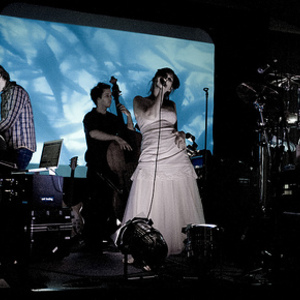 Rebecca and Ryan debuted in a band called Anymore. Inspired more by dreampop bands like Cocteau Twins and less by trip-hop, the band had released only two albums: "Thistlestar E.P." (1996) and "Umani" (1997). Minus Alex Ionov, the members of the band decided to start another project entitled Halou that would have more elements of downtempo electronica.

After W.O.L.Y., the band decided to release on Bedazzled "Sans Soucie", a CD combining tracks from "Umani", remixes, rare and unreleased tracks. Limited to 300 hand-numbered copies, the original pressing of the album was very sought after, as Bedazzled got bankrupt not long after the release of "Sans Soucie". Until the 2004 re-issue on CD Baby, Halou themselves have re-released "Sans Soucie" - a CDr reissue that was only available via Halou website. The release is widely regarded as "Sans Soucie (Edition Two)", although this name only appears on the back cover and although it was also known on the Internet as "Newhalou". Still, "Sans Soucie (Edition Two)" is most often used for the 2004 re-issue.

Halou continued to craft their unique sound on their second release, 'Wiser'. Wiser further defined Halou's sound - both crushing and delicate, electronic and organic, intense and soothing. While still embracing electronics, the addition of live cello, acoustic double bass, and drums further explored the juxtaposition of organic and electronic. Released on Nettwerk Records in October 2001, 'Wiser' was entirely self-produced by Ryan and engineer, co-producer Count.

In anticipation of their 3rd LP, Halou have released "The Wholeness EP" in 2003 and also worked on "The Separation EP". Most of the songs that were created in these sessions ended up on their 3rd LP, "Wholeness & Separation". Released in 2006 on Vertebrae, the album received more commercial acclaim than their previous albums. With exquisite packaging screen-printed onto unique Arigato Pak (ecological version of digipak), "The Separation EP" was released in the same day with "Wholeness & Separation" and features few exclusive tracks as well as 2 b-sides from the single "Stonefruit".

In November 2006, Halou surprised the fans with "Albatross EP". Containing few tracks from the "Wholeness & Separation" sessions that weren't released before, the EP is the first Halou release limited to digital downloads, specifically exclusive to iTunes Music Store. Well-received by Halou fans, the EP is widely regarded as iTunes-exclusive, although a limited number of hard-copy "Albatross" CDs were available during a Microsoft Zune-sponsored show at El Corazon in Seattle on January 13, 2007.

Containing 5 new songs and a reinterpretation of "Hollywood Evening" (a song that was initially released on the R/R Coseboom side-project release "Beneath Trembling "Lanterns"), "Sawtooth EP" (initially entitled "We Wear Strings EP") is the second Halou release to be available only as digital downloads (this time not limited to iTunes Music Store) and has been released on February 12, 2008.

In August 2008 a new album, entitled simply "Halou", has been released. The style of the new album resembles the style on their first material released as Anymore in.

Halou has since changed their name to Stripmall Architecture.

We Only Love You (Edition Two)

We Only Love You