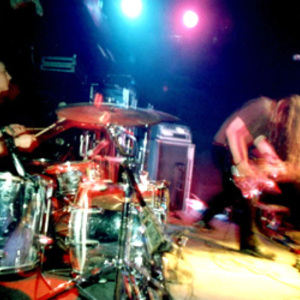 Beginning as a three piece, Halo self-released two CDs in limited numbers before compacting to it's current two piece lineup, allowing for maximum creative power and flexibility. Halo often incorporates electronic noise textures via four-track tapes and digital samplers to complete their shuddering wall of sound. The true power of Halo is best experienced live: a trance-inducing assault on the senses, pure cathartic terrorism and full-frequency blast. Halo has deafened audiences at countless clubs, pubs, warehouses and festivals around Melbourne including supporting Brutal Truth in 1999.

Drawing from an expansive range of sonic ideas and influences, as well as a love of constant experimentation, Halo is equally at home with grinding riff-driven noisecore and improvised dronal ambient noise, often mixing the two for maximum terror effect.

Released in September, 2001, 'Guattari (From the West Flows Grey Ash and Pestilence)' was the ultimate realization to date of Halo's sonic identity. Dealing with fear and loathing in this age of corporate disease and environmental annhiliation, mixing bonecrushing heaviness with searing caustic noise textures, 'Guattari...' delivered truly extreme music from a very unique band. At times compared to a bastardized mixture of early Swans, Godflesh and Disembowelment, Halo dismantled, leaking shuddering passages of electronic decay and radioactive drone on their debut CD for Relapse Records. A two week U.S. tour with labelmates Mastodon and Bongzilla in May, 2002 more than confirmed what Halo's fans were hoping - that Halo's live performances were as deadly as their recorded output. High-profile appearances at both the New England Metal and Hardcore Festival and NJ Metalfest drove the point home even further.

Having punctured the harsh outer skin with 'Guattari (From the West Flows Grey Ash & Pestilence),' Halo burrow deeper into the corrupt inner flesh of post-industrial depravity and corporate disease with 'Body of Light.' A rumbling diatribe of fear, loathing and pure sonic oppression, 'Body of Light' swallows its listener with the density of a collapsing star.

Halo were reported to have a new album on the way in 2008 which is still yet to be seen.

2. Slovenian rock band formed in 1996 by Danilo Kocjan?i? (ex-member of popular band from 60's, Kameleoni), Jadran Ogrin, Zdenko Coti? and tulio furlani? (also from Kameleoni. They are most known by the hit single Anita Ni Nikoli.

3. British Rock band of the 2000's, they garnered much of their initial popularity by the offering of a free EP (Still Here) to all who signed up on their website. That was followed by an album in 2002 (Lunatic Ride), which featured re-recordings of two of the four EP tracks.
When Blake replaced Jim Davey on Drums (2004), the Band became The Vega Method briefly. Graeme Moncrieff, Iain Moncrieff Stevie Yeomans, then joined with John Bevan to form The Exhibition.

4. German Rock band which formed in 04 or 05. The hired and fired about 15 singers until they had one which fit their vision of the band. Halo is situated to Mainz on the Rhine river and they are sharing their practice room with the also local band Nemo.

6. A christian (hard)rock band. Halo released two albums in the early 90's on Pakaderm records and produced by John and Dino Elefante. Simple understandable lyrics and catchy hooks with a strong gospel message, 80's rock with the Pakaderm stamp of approval. Halo was said to be an acronym for "Heavenly Angelic Light Orchestra." The band was made up with Scott Springer- vocalist and bass, Mike Graham-drummer, Keith Mimms-guitarist. Halo recorded their self titled debut album featuring 10 tracks in 1990 and released their second and final album, "Heaven Calling" in 1991.
----------

The first show of the band is in 1994 at the local Art Theatre in Constanta soon followed by TV Shows and interviews at the local radiostations (Radio SKY,Uniplus Radio,Radio Neptun etc) and live performances in Constanta (Fantasio Theatre , The Cultural House , Art Highschool and some open live shows). After that , ?HALO? is a part of the local underground music.

In 2004 the band decide to work the first album for commercial purposes and finishes the demo album in 2005 soon followed by a number of shows in Bucharest (Backstage,Dookie,Stuff Vama Veche,Club Paradiso etc) , Brasov(Club Saloon,Deane's Irish Pub etc) and for the ?Fan Club For The Masses?.

In 2007 Halo gets reviewed in different edition of the magazine ?Sunete? and also starts the work for the first professionally recorded album.

In 22 of May 2008 HALO release an remix single ?Surrender Club Mixes?, produced by Sundesire Records from Russia. The single is mixed by DJ-s from Mexic, Russia, Germany, Romania.

----------
*. Halo is mistagged music written for the Halo video games. See also Martin O'Donnell & Michael Salvatori. If this non-artist appears in your charts, do last.fm and yourself a favor. Fix your artist tags.