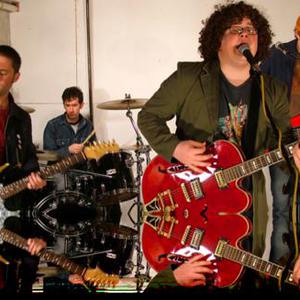 Talking With Half Past Forever With Chris Sligh, what started off as a simple love for music and a desire to be a songwriter, has slowly transformed into something bigger. "Over the last few years, I have worked hard at the craft of songwriting, and even harder at becoming a great singer. I'm not saying the work is paying off, but I am starting to see some dividends...finally." When you sit down with the members of Half Past Forever, it is a welcome breath of fresh air from the expected.

The band, made up of Chris, Adam Fisher and Cole Edmonson, is polite, concise and funny. It seems that the only things the band takes seriously are their faith and their music. Otherwise, nothing is taboo - from politics to what they call religion to just simply cracking jokes on each other, it's all part of their genuine friendship .

?We feel like rock stars should be fun. For way too long, people have been taking themselves way too seriously when it comes to music," says Cole, the band's bassist.

The band's lead guitarist, Adam, chimes in. "We take our music seriously, but we certainly do not take ourselves seriously."


Adam is also the resident drummer; they hire out for live shows.

"The vision of this band, from the beginning," says Sligh, "was for me to write good songs that we could put together in a way that would not only rock, but would encourage our audience to take part in our music. There are not a lot of bands now-a-days that walk that fine line between art and commerce - not that we're successful at that - but we wanna be."

When pressed for more meaning on this, Adam says, "There is nothing wrong with a band aiming to please audiences while still being true to themselves. No one is just one thing: no one is all artist. We are all complex - why do we expect for musicians to limit themselves one way or the other - making art or making music that isn't so artful?"

Chris responds: "Yeah, I mean, why do we look down on certain bands because they make accessible music? Obviously, the goal of art is to transcend, but really - when it comes down to it - we make music for the audience, and if we make self-indulgent crap that only we like...well, we've failed. The greatest way to make music, the way you see great bands like the Who and the Beatles and Pink Floyd is that they make music that the audience can connect with, then surround it, or perhaps infuse it, with stuff that is perhaps a little more self-indulgent...a little more 'strange', if you will"

Cole, who at age 19 is the youngest member of the band, injects his version of the concept it takes many musicians years to figure out. "We want to make music that we like. But we want to be successful and we don't think there's any thing wrong with 'selling out' - as long as 'selling out' doesn't change the way we make music."


The band's "way of making music" has always been to write great songs that audiences can sing along with, then "smarten them up" by adding in as many elements as they can. They are never satisfied with the sound that would be expected.

On this sophomore album, set to release February 20, they have taken this process and, in their own way, nearly perfected it. Take a Chance on Something Beautiful is a cacophony of catchy songs that will have audiences singing along interspersed with odd, esoteric instrumental tracks and effects. The 14 tracks come together to form an album that is an experience from start to finish. Half Past Forever seems to be a long-lost band that makes albums instead of singles.


"I would say that I write more from an album standpoint that I do from a single standpoint," says lead singer and main songwriter Chris. "Don't get me wrong, I think a song like Know or In a Moment are both singles...but as I write and as we produce and record, I am thinking about how to tie in a whole album together."

Adam concurs, "An album is a lot bigger than a simple song. Lots of people can write great songs, but it's tough to put together a full album that ties together and is a call-back to the days of making great albums, like the late 60's and 70's."

"My goal with this album," says Chris, "Is that people would come away with a sense that there is more to hear with each successive listen...yet there is something familiar in the way I write. I think when I listen to my favorite writers, that's the feeling I get. With my favorite artists, I want to hear more in the turn of a phrase or listen for distinct musical performances, yet the songs feel familiar. I really hope that the listener feels the same with this album."

Take A Chance On Something Bea