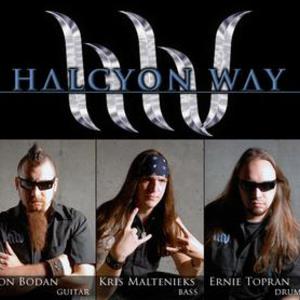 Halcyon Way is Atlanta's premier heavy metal band. Known for their explosive live shows, instantly catchy melodies, precise vocal harmonies, incendiary guitar work, intricate yet pounding drums, and live props and showmanship hearkening back to the glory days of arena rock, they dominate the local live scene. Aurally combining the heaviness of bands like Slayer, the technical prowess of Dream Theater, and with vocal melodies reminding you of Ronnie James Dio's best work, you will be pummeled with the punishing riffs while being lovingly caressed by the unforgettable hooks.

After releasing a string of EPs ? Blind Eyes To The Sky & Deliver The Suffering - the band just released its debut full length album, entitled A Manifesto For Domination. Produced by guitarist Jon Bodan with assistance from James Murphy (formerly of the bands Testament, Death, Obituary, and Disincarnate, and producer of The Hinderers by Roadrunner artists Daath), mixed by Lasse Lammert (Alestorm, Incubator), and mastered by James Murphy, the record was released worldwide on 11/25/2008 via Nightmare Records.

Halcyon Way are currently recording the follow-up release to "A Manifesto For Domination", tentatively due for release in Spring 2010 via Nightmare Records. The album will be produced by Lasse Lammert and Jon Bodan. Drums were tracked at Open Sky Studios with Mike Froedge (doubleDrive, Bloodsimple). In addition, Pamela Moore of Queensryche fame will be making a guest appearance on the album. It also will mark Steve Braun's first recordings with Halcyon Way.

A Manifesto For Domination