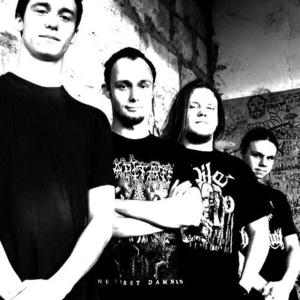 Concieved by Cornelius Waldner in 1995 era vulgaris, Hailstorm had to undergo a long period of instable line ups, until finally settling down with P.W. (guitar, vocals), D.B. (bass) S.B. (guitar), and S.H. (vocals) in 1998. Throughout its active existence, the band published two cassette-releases, participated in a number of compilation tapes and performed a number of gigs, among others with Warloghe, Secrets of the Moon and Embedded.

The recordings of three studio-tracks for a MLP called "Death. Defiance. Decadence." in 2000 marked the end of Hailstorm's chapter as an active project. This release, which also includes a live-track from 1999, finally saw the day of light in MCD-format through Blutvergie?en Productions in December 2006, a prior LP-edition having been confiscated by German thought police under obscure and ridiculous circumstances.

Although considered as physically disbanded since 2000 era vulgaris, Hailstorm is not split up entirely. It is keeping a shadow-like form of undead existence, a return with a new line-up being possible in the near future. Some former members of the band are active in the band Zerst?rer, while Cornelius Waldner is focussing on his neo-classical project Sagittarius.

Hailstorm was created by Klaudiusz (guitar)and Maciej (drums) in July 2004. In October Jarek (guitar) joined us, and soon after did Lukasz (vocals). Inspired by the works of groups such as Testament, Slayer and Sepultura the band started to compose its first songs, nonetheless we had to go on hiatus in February 2005. Jarek left us, and after our activity's revival Tomek took his place, and Wojtek took the job of the bass player. In this line-up we wrote new material inspired by Thrash and Death Metal groups. Our first performance took place on the October 28th 2005, and since then we have played a few gigs in Pila, Szamocin, Chodziez, Ujscie and Poznan. Meanwhile Tomek left us, and Mateusz became the bass player. In March 2006 we recorded demo material. Lukasz left us, and his place was taken by Mateusz. Uhu became our second guitarist. In April 2007 another stuff was recorded in SPHC studio, which we are currently promoting. Nowadays we try to play as much gigs as it is possible so if you want to organize a concert and you are looking for a band to play on it, we are interested in cooperation.