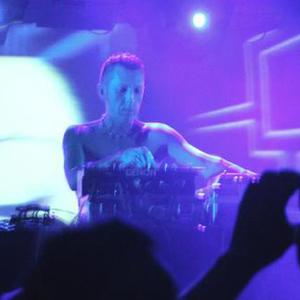 Pedro aka Havoc was born in Spain in the late 60's during the fascist regim but it was in South of France where he began his path in Dark music & E.B.M sound. In winter 1988/89 he was resident DJ of the biggest Dark/Gothic clubs in Southern France & consolidated his career at TROLLEYBUS of Marseille with the mythic fetish-industrial festivals named ARMAGEDDON, which started since 1993 and where many bands and djs of the electro-industrial scene have performed.

Since that moment, H.I.V.+ has begun to invade the minds of distorted music fans all over the world ; beginning with his first noise manifesto "HYPNOISE MOVEMENT".

In 2001 he released his second album, "ABSTRACT & HARSH IRONWORKS", which includes collaborations works with MLADA FRONTA, A CHALLENGE OF HONOUR, MAURI...

This industrial & mystic trilogy was completed with the release of "CENSORED FREQUENCIES & OTHER MYSTIC TERRITORIES (Vs. WIRED BRAIN)" which includes never before released tracks and re mixes by rhythmic noise masters : SONAR, MIMETIC ,LITH or french EBM project E.S.R. The european and international press has praised each and every H.I.V.+ music production, influenced by industrial noise pioneers: ESPLENDOR GEOMETRICO and bands such as THROBBING GRISTLE, SUICIDE, SPK,CABARET VOLTAIRE & harsh noise artists as SONAR, ELECTRONICAT or PANSONIC.

In 2004 H.I.V.+ have toured in America in this their first"INDUSTRIAL VIRUS TOUR" (USA/Mexico/Canada), and remixed big electro-dark acts as HOCICO 's " born to be hated "EP2004 or SONAR "volt revisited e.p" (Hands). At the beginning of the year 2004, HIV + signs on the Polish label BLACK FLAMES and produced a new album to be called "Rotten beat manifesto". Besides albums on various labels HIV + produced also limited editions for confidential underground labels (3 Patttes rec./fr.) and in taken out some Split album with D.FORMA,MELEK-THA or MUCKRACKERS at present with extreme noise act MOURMANSK150 (Divine Comedy rec).

In 2005 HIV+ played at INFEST UK (Bradford) and working with STENDECK on the next cd "Overdose kill me"(which contains video live at Infest and remixes by Saverio Evangelista from MSB/ESPLENDOR GEOMETRICO and collaborations with N?-V?- and DATARAPER) available on the spanish label CAUSTIC Records