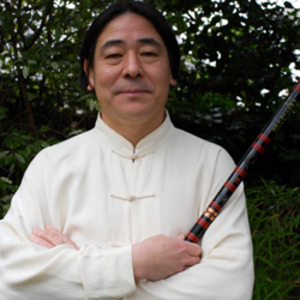 Guo Yue (simplified Chinese: ??; traditional Chinese: ??; pinyin: Gu? Yu?; born 1958 in Beijing, China) is a renowned virtuoso of the dizi (Chinese bamboo flute) and bawu (Chinese free reed pipe). He was born in Beijing, China and as a young boy experienced the Cultural Revolution. In 1982 Yue left China and, with the help of his third sister Yan who was living in England, he studied the silver flute at the Guildhall School of Music.

He plays many kinds of the bamboo flute and currently lives in London, recording for Peter Gabriel's Real World label. His other great love is cooking, and he often combines cookery with flute playing at his concerts.

Since relocating to England, Yue has composed, arranged, performed and recorded traditional Chinese music. In 1990 with his brother Guo Yi (??), who plays the sheng (a bamboo mouth organ), they made a Real World album called 'Yuan', which also features the voice of his second sister Xuan. As The Guo Brothers, they performed at international festivals and concerts, including WOMAD (World of Music, Arts and Dance) Festivals worldwide. Since 1990 Yue worked as a soloist, writing his own music, and from 2003 he has worked in "Shan Qi" with Giovanni Amighetti, Helge A. Norbakken, Guido Ponzini, Wu Fei, and Gjermund Silset.
Yue has not confined himself to traditional Chinese music, and has worked with Peter Gabriel, Sin?ad O'Connor and Hothouse Flowers. He has also collaborated with musicians and composers from Africa, Italy and Japan. In 1992 he made the album Trisan (Real World) with the Japanese taiko drummer Joji Hirota, and the Irish singer/composer Pol Brennan; this won an American instrumental award. Then in 1995 Yue and Joji recorded the album 'Red Ribbon'. In 1999 Yue performed his bamboo flutes concerto 'My Peking Alley' with the BBC Concert Orchestra at the WOMAD Festival in Reading.