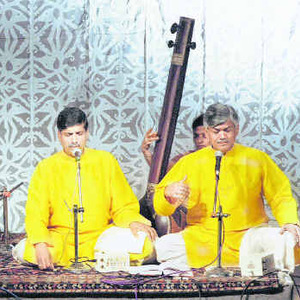 Umakant and Ramakant Gundecha are one of India's leading exponents of the Dhrupad style of music. They are among the most active young performers of Dhrupad in Indian and international circuits. Born in Ujjain in Central India, both were initiated into music by their parents. Gundecha Brothers received conventional university education and learned the Dhrupad vocal art under the renowned Dhrupad vocalist Ustad Zia Fariduddin Dagar and also with Ustad Zia Mohiuddin Dagar (the distinguished performer of Rudra Veena) in Dhrupad Kendra Bhopal.

and Audio Rec London. They have also sung for many television channels in India and have been broadcasted on British, U.S., German and French, Japan and Australian Radio as well. As well as being an integral part of all of India's prestigious music festivals, the Brothers have also performed at many important international music festivals and institutions in about 25 countries in Europe, U.S.A, Australia, Japan, Egypt, Singapore, Bangladesh, U.A.E and Hongkong.

They have received M.P. Govt. Scholarship from 1981 to 1985, National Fellowship from 1987 to 89, Ustad Allauddin Khan Fellowship in 1993, Sanskriti Award in 1994 and Kumar Gandharva Award in 1998 by Govt. of Madhaya Pradesh and Dagar Gharana Award by Mewar Foundation in 2001. Rajat Kamal - National Film Award for the Best Music Direction ( 2006)

Akhilesh Gundecha has learned Pakhawaj playing from Pandit Shrikant Mishra and Raja Chhatrapati Singh JuDeo. He is post graduate in music and graduate in Law. Has also got scholarship from Ustad Allauddin khan Sangeet Academy,Bhopal and Govt. of India. Has accompanied to many of the Dhrupad Maestros like- Ustad Z.F. Dagar, Ustad Fahimuddin Dagar, Pt. Siyaram Tiwari, Shrimati Asgari Bai, Dr. Ritwik Sanyal and Bahauddin Dagar. He has also played solo recitals in Tansen Festival-Gwalior, Haridas Sangeet Samaroh Mumbai, Dhrupad Samaroh Bhopal and many other festivals. Has toured Germany, Switzerland, Hongkong , USA and Canada. Is regularly featured on Radio and Television.