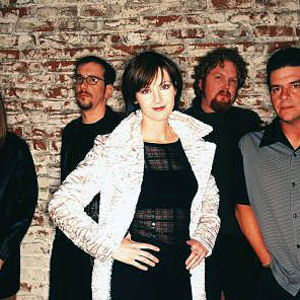 Their name is a quote from Edgar Allan Poe's poem "To One in Paradise".

Pop rock music is usually at the receiving end of the disdain of "real" musicians, as though well-produced, tuneful music was not real. De gustibus is the ruling theme here, however, which allows some of us to enjoy well-done pop rock. Think of the best of Fleetwood Mac, think (dare I say it) of a lot of the Beatles' output, which was enormously aided by the classically trained hand of producer George Martin. Then tune in to the Pennsylvania band Grey Eye Glances and their seventh album they've released, A Little Voodoo.

Grey Eye Glances, which has built a career using non-traditional methods, including the web, formed a partnership with fans to fund and create A Little Voodoo, thereby avoiding the financial drain of a record label. They used four producers to create the songs on A Little Voodoo, not because it was problematic but because they had this idea, see, to take a whole lot of songs (50+) from the various members of the band and boil them down to the best nineteen, then go in a record them in batches of four or so songs, using different producers for each session. The engineers and producers included Jerry Marotta (Peter Gabriel, Indigo Girls, Paul McCartney); Kevin Killen (U2, Elvis Costello, Tori Amos); Peter Moshay (Mariah Carey, Jennifer Lopez, Sean Lennon/Yoko Ono); T-Bone Wolk (Paul Simon, Billy Joel, Eric Clapton, Hall & Oates); Paul Bryan (Aimee Mann) and Todd Vos (Paula Cole, Natalie Merchant, Phish). Ten songs finally wound up on the CD.

The results, which might have been disastrous, are instead, splendid in a thoughtful way. There might be one song with a hook that would appeal to an A&R guy but most of the songs have a deeper appeal than that. After listening for some time, a tune called "Good Folks" stood out for its melodic chorus and well-honed lyric:

"When the wind blows from the North

and the sky looks so divine.

And the waves roll back and forth,

remember it happens all the time."

Most of these songs are very musical and melodic, with thoughtful arrangements - for some, the very definition of pop rock. The primary singer, Jennifer Nobel, who also contributed a number of songs, possesses an elegant instrument, which she uses to proper effect all around. The harmonies are evocative of the Coors' early CDs, blending so well that it's well nigh impossible to separate them.

For the A&R crowd, here's the radio tune: "Big Red Boat," which is upbeat and cheerful. Come to think of it, that might be a negative, given the current state of commercial radio, which seems to be mostly interested in selling sour attitudes.

For the rest of us, including Boomers who might have not listened to anything new since 1985, this CD can go on your changer and the only people who won't like it will be your teenaged male children. A better recommendation than that I can't manage.

Grey Eye Glances' CDs can be found at http://www.greyeyeglances.com/, where you can listen to MP3 samples of a number of tunes. Do go check into it, by all means.