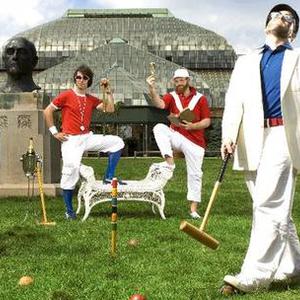 Greenskeepers is forever changing as a meeting of minds and a catalog of music. The name was founded by childhood friends James Curd and Nick Maurer in 1999. James and Nick grew up skateboarding together in Chicago. Nick bounced around local punk bands while James was djing in Chicago clubs and raves when he was only 15 years old. At the age of 18 James built up a music studio and began producing Chicago house. His first release came out on the french label Basenotic in 1999. Soon after James released "Whats Your Man Got To Do WIth Gan" on Classic Records.

At the age of 18 James built up a music studio and began producing Chicago house. His first release came out on the french label Basenotic in 1999. Soon after James released "Whats Your Man Got To Do WIth Gan" on Classic Records. He released it under the new Greenskeepers name and forever left it's mark in the electronic music world. The stand out song on the EP was "Low and Sweet" which was named one of the "Festive Fifty by British dj John Peel. This helped make James an international Dj that was constantly traveling to spread the Greenskeepers sound.

In early 2001 Nick and James went in the studio together to record. The result of this effort was the single "Should I Sing Like This?" It was a international club hit and showcased Nicks unique vocal stylings.

After the success of "Should I Sing Like This" Nick made the big move over to Heidelberg Germany. This left James on his own to build on the Greenskeepers legacy.

It was at this time in 2002 that James released swing house music under the Greenskeepers name. "Low and Sweet" was a fore shadowing of the new style that would take the dance floors over. He also established a new record label "G-Swing" specifically dedicated to this sound.

After Nick moved away James collaborated with many other artist that shared his love of electronic music. He worked with a talented keyboard player named Mark Share on remixes and original music. It was easy to see that James and Mark worked well together and James featured 3 of Marks songs on the debut Greenskeepers album "The Ziggy Franklin Radio Show".

Mark became a full member of Greenskeepers in 2004 and brought his talented bass playing friend Coban Rudish on board.

Now that there were three Greenskeepers they went in the studio to work on their second album "Pleetch". Pleetch was released by Classic records in the U.K and OM records in the United States. It featured guest vocalist and even had Nick on two of the songs that he created with the new band on a week long studio trip to Chicago.

Pleetch was greatly received across the music world. The quirky song "Lotion" , that is inspired by the cult figure Buffalo Bill from The Silence of the Lambs was an underground hit. James cut a video using the original film footage and uploaded it online. In less then two weeks the "Lotion music Video" had been downloaded over one million times. Pleetch also had commercial success by licensing songs to T.V and film. "Lotion"," Back In the Wild", and "You Don't Know Me" were all featured on the hit show "Greys Anatomy". "Slippin" was featured on C.S.I Miami and "Keep It Down" was featured on "Point Pleasant".

Now that the Greenskeepers had a new album they put together a LIVE show to rock the clubs with. The show consisted of James djing, Mark playing Keys and Coban playing bass. This version of the live show blew crowds away from Scotland to Jerusalem to Los Angeles. They toured as a three piece band for all of 2004 and then Nick moved back to Chicago to rejoin the Greenskeepers and debuted the full four piece band at Miami music conference in 2005. Billboard called it the stand out performance of the conference.

Finally there were four Greenskeepers all living in Chicago and it was time to cultivate the new sound by all being in the studio at the same time. The finished product of this teamwork was "Polo Club" released on OM. "Polo Club" is a two disc album. The first disc is 17 electronic, rock songs. The second disc is a continuous DJ mix by James. The title song "Polo Club" and "15 Minutes" were released with remixes by The Rapture, Derrick Carter, Dimitri from Paris, Tommie Sunshine and more. "Polo Club" was given amazing reviews and full marks in magazines around the world. Their version of "I Want A New Drug" was featured in the film "What Happens In Vegas" and it was time to hit the road again.

James and the band were constantly touring at some of the most respected clubs and festivals around the world. Park life in Australia, T In the Park in Scotland, Electric Daisy in Ireland and SXSW here in the States.

Rockstar games contacted James with a request to feature a song on their new game "Grand Theft Auto 4" The guys kicked ideas around and came up with the song "Vagabond". It was made by James, Mark, Nick and long time friend and singer JDub. It was a perfect marriage of rock, dance and great back and forth vocals by Nick and JDub. Rockstar loved the song so much that they used it for the worldwide T.V. ad campaign.

It was at this time in 2008 that James shifted gears and focused on working on new solo songs and collaborating with other artist. He made "Pick Up What I'm Putting Down" that was featured on Mark Farinas Fabric mix CD. He released a full mix CD on GKM/OM for the Australian super club Electric Circus called "Limbo Sessions". James also went back into the studio with Nick like the early days when it was just the two of them. Nick and James finished a full album and wanted to do something special with it. With the new album finished Nick was missing the European lifestyle and made the move back to Germany. James called up longtime friend Tommie Sunshine and set the stage for a outside the box collaboration. James handed over all the studio sessions to Tommie and he put his special Sunshine touch on all the songs with live drums and a massive sound. This album is going to be released under the Greenskeepers name making Tommie a walk on band member for the new live show!

Currently James is touring the wold as a DJ and also with the band. Currently it is a three piece with JDub on Vocals, Mike Steve on Bass and James on keys and vocals too. When the new album is released Tommie with join the band to make it a four piece.


Things have not slowed down in 2009 for james with the signing of his single "We Just Won't Stop" that features JDub on vocals to DFA. This single is set to be released in June of 2009. He also remixed "The Juan Macleans" single "One Day" for DFA as well. Dukes of Windsor's "Runaway" received a James Curd mix for Island in Australia.