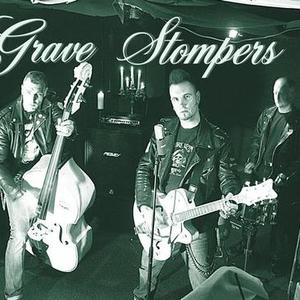 It was in autumn 1993 when Gernot grabbed his father's western guitar and drove to Holzi's house situated in the next village in the outskirts of Munich City. They both didn't know each other very well, but Gernot was searching for a bass player to start a band together with vocalist Florian. They knew that Holzi owned a double bass - and after this spontaneous Guitar & Bass session Holzi joined them.

Alex, a former classmate of Gernot, took over the Drums and so the first Grave Stompers line up was complete. Inspired by classic horror and obscure Rock'n'Roll they started playing traditional oldschool psychobilly. Within only a few months the Psycho quartet from F?rstenfeldbruck (Germany) managed to become a supporting act for lots of international bands on countless Festivals in Germany.

In 1997 they released their debut album "Rising from the Darkside" which featured their new drummer Martin Sledgehammer. The first photo session with this new line up caused quite a fuss: equipped with skulls, bones and axes and stuff the guys went to the photo shooting at a local cemetery. Just when the work was finished and the band was ready to leave the graveyard several armed policemen arrived at the scene. The Grave Stompers could escape but they got charged with grave violation. However, the case got dismissed after some witnesses had stated that they didn't feel threatened by the band... At that period of time the sound of the Grave Stompers became very hard and dark with metal influenced guitar riffing and fast Drums & Bass.

Two years later the Shouter left the band and guitarist Gernot had to do vocals as well - first to be heard on the 1999 release "Funeral Suite" on Crazy Love Rec. It was the band's aim to create an album on which EVERY song is connected to the dark, sick and morbid things in life. For this purpose even lyrics got changed: the first song ever written for the Grave Stompers was entitled "Summertime" (dated back to 1991) and was never released before because of it's groovy and positive vibes. But lyrically rearranged and sung in a different way it turned into "Haunted House" and found its way on this record.

The Grave Stompers now known as a trio played several Headliner Shows in Europe and went on a small tour in Italy - but the following years the boys didn't play many shows. They released a limited and now pretty rare split 7" with garage friends "Pot Belly" (2000) and wrote new material for their follow up album "Bone Sweet Bone" (Crazy Love Rec. 2003) - which took more time than expected. Their style returned back to their roots: twangy guitars, fast double bass, jackhammer beat and smart vocals with tons of delay - traditional, oldschool Psychobilly! Now in 2006 it's time for the follow up album and the "13 years of Grave Stompers Anniversary seven inch" - watch out!