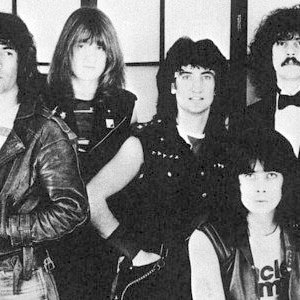 There are at least four bands with the name Grand Prix. 1) Another Gary Usher studio created group. They had released the single "41 Ford / Candy Apple Buggy" in (1963), 2) A NWOBHM band, famous for their two LP's "There for None to See" (1982) and "Samurai" (1983). 3) From New Zealand: The first Grand Prix album, ?Racing Lines? (2002), was a low-key event. It was preformed and recorded without drums or bass, featuring only a stripped back vocal and twin guitar set up.

3) From New Zealand: The first Grand Prix album, ?Racing Lines? (2002), was a low-key event. It was preformed and recorded without drums or bass, featuring only a stripped back vocal and twin guitar set up. In the early days they played in full racing overalls and helmets, which was rather uncomfortable under the hot stage lights. However, during this time they did compose some local classics, like ?Donuts in the Sand?.

Since that casual beginning, the line-up has expanded to four, with original member Andrew Mckenzie on guitar and vocals; Davey Geard [Letterbox Lambs, D-super] on drums and vocals; Mike Banks [the Del Burgoes] on bass; and Viv Treweek on trumpet. Songs are still central to what they do ? but now they have a hi-revving rhythm section (that can match any in the land) complemented with tex-mex trumpet - transporting you straight into the remotest dessert drag strip.

In late 2004, with this new line up, a new set of songs, and new attire, the band headed into Wellington's Inca studios to begin recording ?The Way of the Racer? with Mike Gibson. They recorded all their songs live in the studio ? meaning what you hear on record is what you hear coming from the stage ? there's no studio trickery hiding musical inadequacy on this album. And as Phil Reed (Real Groove) writes, they have a ?kick-ass live set??which means Grand Prix are a pretty tidy combo. The initial recording sessions were followed up by a second with Brett Stanton, early in 2005.

Why, you may ask, are all the songs about racing cars? Well, a few years ago and faced with writers block, songwriter Andrew McKenzie came to the realisation that racing was the perfect metaphor for life. Speed, victory, loss, death, love, honor, power, going in circles; all the grand narratives ? they are perfectly encapsulated in the dusty oily world of racing car culture. And the more Andrew explored the highs and lows of this super octane world, the more the inspiration flowed, the more the songs kept coming. In other words, less equaled more.

D Dylan D of a A Low Hum describes Grand Prix's sound pretty accurately when he writes: ?While the first release could be described as 'country' music, 'The Way of the Racer' is far more Morricone/ Mariachi than Weissberg /Grand Ole Opry, that is to say, more Nuevo Laredo than Tennessee and it's that south of the border element that defines Grand Prix's latest work.?


4) Grand Prix is a new and fresh collaboration between Swedens
two young n upcoming mcs, Erik and Anton. Grand Prix is providing a massive and fresh
sound that soon will be heard all across the country. Erik, Is the former member of the
group "FFL" who through their song "En genvag till framgang" reached over 30.000 downloads
and kept 275 000 visitors entertained through their homepage (ffl.se) over a period of 3 years.
Anton, Is the former member of the group "The Ninjas" who kept Gothenburg entertained with one
of swedens best live shows including a full scale band with great musicians.
Through the years Anton has recorded and released tracks on the internet and built himself a
large fanbase and a broad network. At the moment Grand Prix is working in the studio togheter
with Random Music trying to complete an album and find a record deal that suits the group and
its purposes.

There For None To See