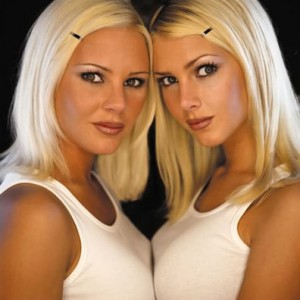 The blond sisters Magdalena and Hannah Graaf first refused when they were asked to make a record. They didn't want to base their recording on their popularity as models. But they couldn't refuse anymore when Swedish top producers Christer Sandelin and Tommy Ekman contacted them. Their first single You Got (What I Want) that sold platinum was released in summer 1998 and it was sold several tens of thousands in Sweden. Their second single Give It Up was released in October 1998 and it was very successful in Sweden's single chart.

Video from the track was played a lot on MTV Nordic, just like the first song did too.
Graaf's first album Graaf Sisters was released in November 1998. The album includes ten tracks.
The album was produced by Sandelin, Ekman and Per Adebratt and Rob'n'Raz and Martin Pihl the track Good Good Goodie Goodbye. Backgrounds were sang by e.g. Nana Hedin from E-Type and Jeanette S?derholm.
From the album were also released the tracks Never Never and Heartbreaker as singles in 1999, but they were less successful.

2006 : Hannah Graaf competed on the 18th January to represent Sweden in the Eurovision Song Contest. She was not selected.