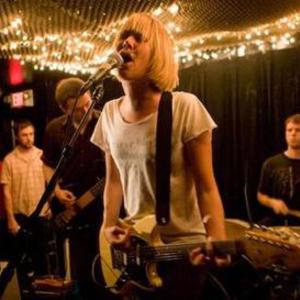 GOWNS began in late 2004, in Los Angeles, as a duo of Erika Anderson (a South Dakota native) and Ezra Buchla (a California native), both of whom were then quite active in various LA-based music projects. Ezra sang for Mae Shi on their first four records, and Erika was a guitarist for Amps For Christ and co-fronted the band blue silk sutures with Tara Tavi, another AFC member. Gowns combined folk/grunge songwriting with noise-territory production values and radical, digitally-assisted improvisation, with generally eerie and delicate results.

In 2005 they released a limited-edition CDR on Folktale entitled "Dangers of Intimacy" (re-released in 2009 on single-sided 12" vinyl.) Carla Bozulich (Evangelista, Geraldine Fibbers) contributed vocals to one song.

As of December 2009, the live lineup of Gowns consists of Erika Anderson, Ezra Buchla, and Corey Fogel (when scheduling permits). Their live sound has evolved in recent years to something generally balanced between their "rocking" and "intimate" previous incarnations, more focused while still incorporating heavy doses of improvisation, enveloping ambient sound, and extreme dynamics. Pitchfork recently described Gowns as "one of the most heart-stoppingly great live bands on planet Earth."

As of February 2010, Gowns are officially broken up. A final release, the 17-minute "Stand and Encounter" was released from their website for free download.


Past and present members: