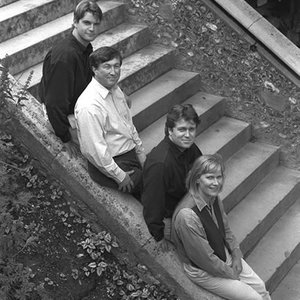 Gothic Voices is a small consort of singers which has become world-renowned both for its unique repertoire and for the refinement, purity and spirituality of its performance of medieval music. Each singer is an experienced soloist and an integral member of the group. Founded twenty-five years ago by scholar and musician Christopher Page, Gothic Voices has had a career of unparalleled success and diversity, bringing unfamiliar music - predominantly from the 11th to the 15th century - to audiences all over the world.

Founded twenty-five years ago by scholar and musician Christopher Page, Gothic Voices has had a career of unparalleled success and diversity, bringing unfamiliar music - predominantly from the 11th to the 15th century - to audiences all over the world. The group has sung in great cathedrals in Germany and Spain, medieval abbeys in France and Italy, theatres, concert halls and even a shopping centre (in Ecuador). The singers have toured widely in Europe, Scandinavia, Israel, North and South America to immense acclaim. In London they have appeared in the BBC Promenade concerts and at the Spitalfields Festival, performing regularly in the Wigmore Hall and at the South Bank Centre. Elsewhere in Britain they have performed at the Aldeburgh and Chester Festivals, the York and Birmingham Early Music Festivals and at the International Festivals of Edinburgh and Cheltenham. Overseas venues include the Flanders and Utrecht Early Music Festivals and the Vestfold Festival in Norway.

As well as its wide-ranging concert schedule, Gothic Voices has recorded more than twenty CDs, of which three won Gramophone Magazine Awards, whilst its first disc: ?A Feather on the Breath of God ? Hymns and Sequences by Abbess Hildegard of Bingen' remains one of the best-selling recordings of pre-classical music ever made.

Underlying these achievements has been Gothic Voices' commitment to bring medieval music into the mainstream; and, through the beauty of performing style and the thoughtful range of programmes which make imaginative use of their available combinations of voices, the singers have won the appreciation and devotion of audiences throughout the world.

Nor has that commitment been only to medieval music: Gothic Voices takes the initiative of commissioning contemporary works for its unusual vocal forces. In 1997 the group commissioned a piece by Bayan Northcott and gave its first performance in the Cheltenham Festival. Another newly-commissioned piece by Andrew Keeling is to be recorded early in 2005 and will receive its first performance during a tour of Slovenia in August. The group was involved in the ?Homage to Gyorgy Ligeti' series at the Queen Elizabeth Hall in London and the Theatre du Chatelet in Paris, whilst future plans include further collaboration with the Chilingirian String Quartet in programmes contrasting medieval music with works by Sir John Tavener and Igor Stravinsky.

As Gothic Voices embarks on a series of concerts to celebrate its silver jubilee, the singers are proud to claim that, in a world where the term ?medieval' is so often used in a pejorative sense, their quest remains as ever to perform this wonderful music in a way which is positively medieval!

Master Of The Rolls

A Feather On The Breath Of God