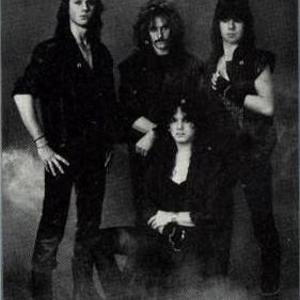 Gotham City was formed 1980 in the Swedish city Ume?, they released their first demo in 1981 which featured members: Ola Ohlsson - Vocals, M?rten Edlund - Guitar, Bj?rn Erik Melander - Bass and Jonas ?-stman - Drums. The song Borderline was later included on "The Unknown" album with changed lyrics. Some of the other songs would also show up on the 1983 EP "Black Writs". In 1982 they released the cult single "Gotham City / Killer Angels" on Brute Force records limited to 300 copies. There is also bootlegged versions of this 7" on clear vinyl.

In 1982 they released the cult single "Gotham City / Killer Angels" on Brute Force records limited to 300 copies. There is also bootlegged versions of this 7" on clear vinyl. A year later they would put out their last recorded material with vocalist Ola Ohlsson; the EP "Black Writs" which was recorded in February at Tonteknik Studios, engineered by Per Sorlin. Later in 1983 Ola Ohlsson quits Gotham City and Anders Zackrisson takes over as the vocalist, a 9-track demo is recorded.

In 1984 the monster is released; their first and only full-lenght album "The Unknown". This would also be their last official release.

1985: Gotham City releases a live demo entitled "Live in Ume?", these recordings where orginally made for Swedish Radio (2/3-1985) and there where small talk with a reporter between the songs.

1986: Gotham City recorded their last demo which had only 2 tracks: "Hang on & Lost In Time", did some live gigs and also got themself a new guitarist Michael Lundholm of OZ, who also made their new "bat-logo".

1987, the end of Gotham City. Sadly the band would split up this year but some of the members (Anders Zackrisson & guitarist Michael Lundholm) continued to play under the name High Tension for a while and did some live gigs.
Micke Lundholm have also been involved in many other bands, here is a song from 1993 called "Light Years" from one of his projects.

A bootleg compilation of Gotham City's 7" Single, EP and Album exists, entitled "The Legend of Gotham City", also a video recording of a live gig at Ersbodaskolan...

The Legend of Gotham City