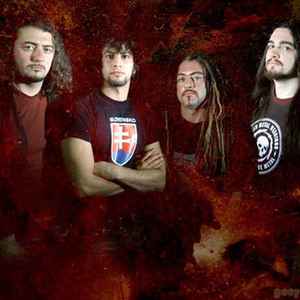 GORY BLISTER made their debut in 1991 and 1993 with a couple of demo tapes which were received with great reviews by the most important Italian magazines. But the first real exposure was given by the mini CD ?Cognitive Sinergy? (1997_Nosferatu Rec.) that made the band well-known in Italy creating the first league of Gory fans. In 2001 the band was picked up by the German compilation CD ?Unerhort?, being well-known europewide as well. magazine Rock Hard and included into the


In 2001 the band was picked up by the German compilation CD ?Unerhort?, being well-known europewide as well.
magazine Rock Hard and included into the

In 2003 Gory Blister signed to the French label Sekhmet Records and released their first full length album ?Art Bleeds?. This release got very good reviews both from the media and fans. This resulted in their first headlining tour in Italy and expanded their fanbase from Europe to the worldwide underground.

In January 2005 GORY BLISTER signed to the Dutch label Mascot Records and the first release was 'Skymorphosys' (2006), including a cover version of Death's 1000 Eyes. A European tour with Sadus (U.S.A.) and Darkane (Sweden) followed to promote the new album.
After the European Tour, several headlining gigs in Italy with supporting acts such as Amoral (Finland) gave GORY BLISTER the chance to join the Italian Evolution Festival (2007) and share the same stage with monster acts like Nevermore, Cynic, Sodom, Kataklysm, Virgin Steele, Sebastian Bach and many more.

In April 2009, Joe and Raff set the follow-up to 2006's "Skymorphosys" and entered the studio to record the third and new album titled ?Graveyard Of Angels?, release date 2009 under Mascot Records. During the promotion to this album Gory Blister music gained new fans worldwide and in the Web, reaching over 110.000 plays in the Last FM community (http://www.lastfm.it/music/ Gory+Blister ), 128.900 profile views and about 72.000 plays on MySpace (http://www.myspace.com/goryblister ).


2012 - Gory Blister signed a new deal with Becker Team Records, a division of Scarlet Records for the release of the new album entitled "EarthSick" scheduled in April. The new work contains 10 new songs of pure, and Technical, Brutal, Death Metal in the style that has always distinguished the band over the past 20 years.


DEATH METAL IS A FORM OF ART !