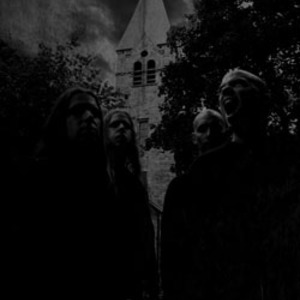 From the ashes of chaos rises Gorath? Set ablaze by F. Dupont as a one man project from 1995 apart from other main underground chapters already closed. The first winters were a try out and 1996 brought forth a worthless tape ?A winter slavery? that would never see the light of day. Gorath's cold black metal is highly influenced by older Norwegian acts like Ulver, Arcturus, Fleurety, Enslaved, Darkthrone, etc.

Meanwhile Gorath's sound has entered the more modern sounding twilight? One year later, in 2004 to be specific, another split was set. ?The blueprints of revolution? came along with the pagan black metal band Theudho.

After receiving a lot of positive feedback this one resulted in a deal with Black Owl Records. The very same year Gorath's debut album ?Elite? was recorded and released in early 2005. This time the vocals done by F. Dupont himself. Later that year the German Fog Of The Apocalypse proposed to release "Elite" on LP with different artwork.

Gorath swapped label and signed to the young Dutch Descent Recordings label. The band's musical style evolved more and more to black metal with a progressive approach. It all resulted into "The fourth era" released in 2006. May aeons glow in the sun...

Haunting The December Chords & The Blueprints For Revolution

The Blueprints For Revolution