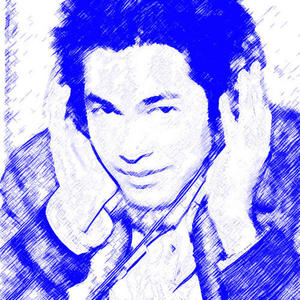 Goodbye July is the side project of Paul Rijnders, best known as keyboardist for the American synth group Anything Box (Living in Oblivion). Anything Box's bio can be found on wikipedia. He is joined by Cheryl Amalfitano on background vocals. Goodbye July released their debut, "Basura Blanca" in 2004. The album is a mix of the synthpop that Paul grew up on and the alternative guitar stylings of which he later grew fond.

Goodbye July released their debut, "Basura Blanca" in 2004. The album is a mix of the synthpop that Paul grew up on and the alternative guitar stylings of which he later grew fond. Standout tracks include "Salvation" and "Asleep on Your Soft Word", which was featured on New York Electroclash DJ Larry Tee's compilations. Also included is the Christmas themed "The Only Things Worth Opening", a track he wrote while his mother was in the hospital for heart surgery. Though the song was a celebration, her life was most ironically claimed by breast cancer the day after Christmas three years later.

Paul has an indie rock side project called the Lamented. He is also most active with Anything Box and has recently toured South America several times where they were met by thousands of adoring fans and featured on several television shows.

Goodbye July's new album is "It Was Dark For So Long, We Thought We Were Dead". The download version appeared on iTunes during the Summer of 2008, but the physical album officially released on Halloween 2008 and is considered the true album. It is different in that most songs fade into each other via sound effects or placement and has a bonus track "How Could You Not Be My Friend?". The artwork is provided by S. Philip. G. of the Baltimore art scene. It can be purchased at CD Baby or at A Different Drum where it entered the weekly sales chart at number 1.