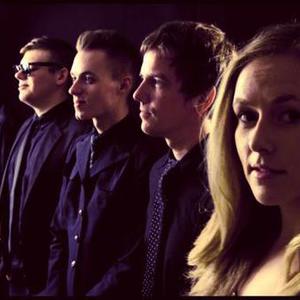 Gold Motel is the Chicago-based solo project of singer-songwriter Greta Salpeter (a.k.a. Greta Morgan), formerly of The Hush Sound. The band consists of Morgan (vocals, piano/organ/keyboards), Eric Hehr (guitar), Dan Duszynski (guitar, vocals), Matt Minx (bass), Adam Kaltenhauser (drums). They performed for the first time in December of 2009 with a sold out headlining show in their hometown of Chicago at The Beat Kitchen, coinciding with the release of the "Gold Motel" EP.

They performed for the first time in December of 2009 with a sold out headlining show in their hometown of Chicago at The Beat Kitchen, coinciding with the release of the "Gold Motel" EP.

In June of 2010, they released their critically acclaimed debut album "Summer House," which had SPIN Magazine dubbing them a ?hot new band,? and NYLON Magazine describing their music as ?[songs] begging to be blasted out of your car's rolled-down windows.?

Gold Motel quickly followed up Summer House with the "Talking Fiction" 7? in November 2010, which continued to establish their distinct sun-drenched sound.

The decidedly West Coast outlook of Summer House and Talking Fiction took the band on both national and international tours through 2011, playing alongside acts such as fun., Kate Nash, Hellogoodbye, OK Go, Butch Walker, Cold War Kids, They Might Be Giants and more. 2011 also found them making debuts at festivals such as Lollapalooza and SXSW. While the band continued to tour and perform through the end of the year, their music was featured on various television shows and commercials. In addition, Gold Motel was featured on a variety of tastemaker radio stations such as KEXP and WXPN, and earned raves from the likes of Nylon, LA Times, SPIN, The New York Post, Alternative Press, Billboard, Refinery29, and Paste among others.

After two years of touring and supporting Summer House, they began pre-production for their new album in Los Angeles, CA, splitting their time between rehearsals in a house up in the hills of Laurel Canyon and a pool-house in Glendale. Those early pre-production sessions led to the initial material that would make up their Self-Titled sophomore album, "Gold Motel." The band continued pre-production back in Chicago and began preliminary recording in September of 2011 in guitarist Dan Duzsynski's home-studio, DandySounds Studios. Like "Summer House" and "Talking Fiction", Gold Motel was self-produced by the band.

In contrast to "Summer House," "Gold Motel" showcases a significant growth and evolution in the band's songwriting and tonality as they continue to explore new musical territory centered on themes of youth, memories, and nostalgia. However, in comparison to their previous releases, "Gold Motel" still captures the band's renowned pop sensibilities and illustrious West Coast sound.

Their Self-Titled album is available now on Good as Gold Records/Thirty Tigers. Purchase the album in any format, along with other merch, at http://www.goldmotel.bigcartel.com/.