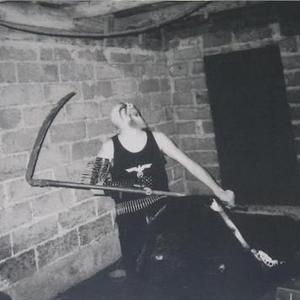 Goatmoon is a one man black metal band from Lappeenranta, Finland. The lyrics are mostly about white supremacy, hate and anti-religion. BlackGoat rejects the "NSBM" label because, although racialist in his lyrics and perspectives, he doesn't particularly identify his lyrics with the National Socialist movement. Goatmoon was created in spring 2002 from the ruins of BlackGoat's old band Count L?hde(-99).

Goatmoon was created in spring 2002 from the ruins of BlackGoat's old band Count L?hde(-99). First recordings BlackGoat made by him self, but in some point of summer ?02 joined drummer T. Bloodvengeance, who played on the half of songs on the first demo. On the early winter of ?02 Bloodvengeance left the Goatmoon. BlackGoat has recorded six demos by himself during the years 02-05. First full length album was brought to moonlight late winter '04 released and distributed by Werewolf records.