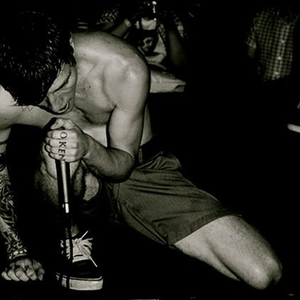 Go It Alone started as a project between friends Mark and Lucas in the spring of 2002, wanting to make melodic youth crew much like their underrated favorites Battery, Outlast and Section 8. Twelve songs were written and six recorded in what became the Hollywood North Demo. Mark then left with the band he was with at the time, the Attack, for a two month North American tour while Lucas stayed at home and began solidifying a lineup.

Upon Mark's return it became apparent that his nomadic lifestyle was going to lead him to Southern Europe, Nothern Africa, and that fabled land of milk and honey at the end of the medditerrainian where people have been killing eachother for thousands of years over the writings of semi-literate shepherds. But anyway. The project was put on hold for about half a year until Mark returned from enriching his life and almost drowning off the coast of Morroco. The two friends decided to commit to the band and put their burning desires to constantly move around and not be anywhere for too long on hold. A line up was found with Norm on bass, Greg on Guitar and the legendary Smokestack Honeyman on second guitar. With this line up the debut EP was written and recorded, and the band embarked on our first West coast tour. It was a first time out, ripe with cancellations and overheating vans, but we had a blast. We came home for a month chilling out until our east coast tour slated for that August. It had become necessary to replace both our guitar players for this tour so we recruited famed hip hop producer Zach "Fund$" Muljiat for second guitar and Scott McScotterson for lead. The tour was incredible stretching from Chicago to Virginia Beach and everywhere in between. When we got home the old line up resumed, but Greg's other band, The Red Light Sting, was becoming more than full time, as was Go It Alone, and Greg could no longer commit in the way we needed. Smokestack took over lead duties and former scab member Scott McScotterson the Stacks place in the rhythm section. With this line up we began writing for our full length and headed out on our third tour in just under ten months of existence. This tour was the best we'd ever been on with reactions far and above what we'd expected, and only one snowstorm breakdown in the strangely lunar expanse that is the Nevada desert. We are currently finishing up the writing for our full length with Rival Records, and in the process of booking a full North American tour for the summer of 2004. We will be embarking on several West coast weekends in the spring and venturing to Vancouver Island. This is what we do, we'll see you soon.

The Only Blood Between Us