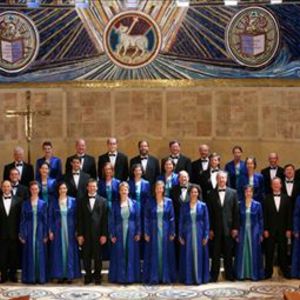 Gloriae Dei Cantores (Singers to the Glory of God) is a 40-member mixed choir, performing works for all periods and styles from Gregorian chant to the twentieth century. The choir boasts a catalog of fifty recordings, distributed by Paraclete Press (Orleans, MA) and Harmonia Mundi USA (Burbank, CA). The choir makes its home at the Church of the Transfiguration on Cape Cod, singing worship services and concerts through the year. Gloriae Dei Cantores regularly tours in the U.S. and abroad.

AllMusic.com says: "The roots of Gloriae Dei Cantores date to 1976, when members assembled informally as an ecumenical choir active in the Cape Cod area. Director Elizabeth Patterson gradually shaped the group into a first-rate choir. In 1987 the ensemble traveled to Cambridge, England, for brief studies with George Guest and Stephen Cleobury. The former was impressed with the choir's collective talent and believed it worthy to move from amateur to professional status."

Patterson eventually accepted his judgment (or allowed it to merely confirm her own), and the ensemble adopted the name Gloriae Dei Cantores in 1988. The following year was made its first international tour, an ambitious and successful excursion that covered major cities in England, Holland, Germany, Hungary, and the former Yugoslavia. Though it was now a professional choir, the members maintained their volunteer, unsalaried status, which still holds true."

A Prophecy of Peace / The Choral Music of Samuel Adler

By The Rivers Of Babylon

Eclipse; The Voice of Jean Langlais