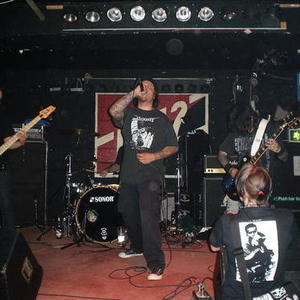 The ultra heavy, nihilistic earthquake known as GLOOMY SUNDAY was spewed forth from the bowels of Gothenburg, Sweden in summer 2002... Disenchanted with the style of music of previous bands they played with, they decided to form a band that played the music they grown to love, DOOM. Denis had moved to Sweden from England in the winter of 1999 where he had played with various bands the biggest being legendary crust pioneers DOOM and gore/crust band BLOOD SUCKING FREAKS. Par had previously played bass with Gothenburg grind/thrash band ENSUING HELL.

Being probably the only doom/sludge band in the city and being the only people we knew playing that style of music we soon realized we was faced with a hard task, finding other members to take over the drum and microphone duties. The later problem was solved when I thought of Jari, who I had met a few times before and learned that he too was into the same bands as us and after a bit of persuasion joined the band on vocals. Jari had previously played with the crust band RUDIMENTOR and later the metallic hardcore band 13ITCH. After trying out a few drummers we met Stefan who owned a doom/stoner record shop in the centre of town. He was playing a gig with his previous band STONE SERPENT when we got talking and we asked him if he would like to join GLOOMY SUNDAY, after one rehearsal we noticed the chemistry was there and he has occupied the drum stool ever since. Stephan also plays in RELIC. By the way, the name Gloomy Sunday is from an old Hungarian folk song that was written in the 1930s that is said to influence suicide.

Beyond Good And Evil